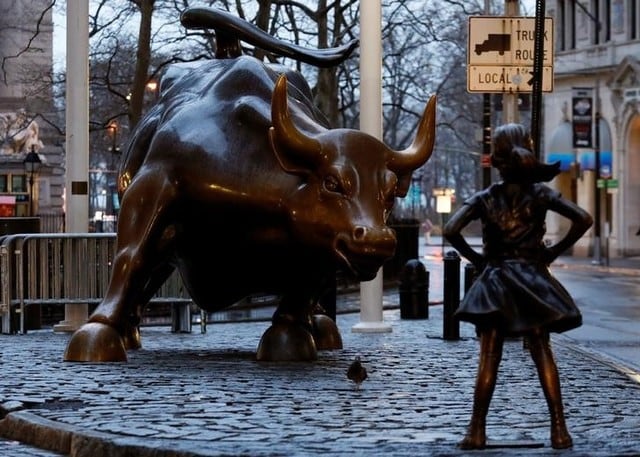 The statue is seen as part of a campaign to push companies to put women on their boards.

New York: As many American women prepare to draw attention to their role in the workplace, a Wall Street firm on Tuesday put up a statue of a girl in front of Lower Manhattan's well-known bronze charging bull, as if to fearlessly stare it down.

Placing the diminutive, grade school-aged girl in front of the massive bull on the eve of International Women's Day was a way of calling attention to the lack of gender diversity on corporate boards and the pay gap of women working in financial services, a spokeswoman for State Street Global Advisors said.

"A lot of people talk about gender diversity, but we really felt we had to take it to a broader level," said Anne McNally, whose firm is an investment management subsidiary of State Street Corp.

In conjunction with International Women's Day on Wednesday, many American women are planning to stay home from work, which has led some schools to cancel classes.

Organizers asked women who cannot afford to miss a day of work to limit their shopping to female-owned businesses or to wear red. 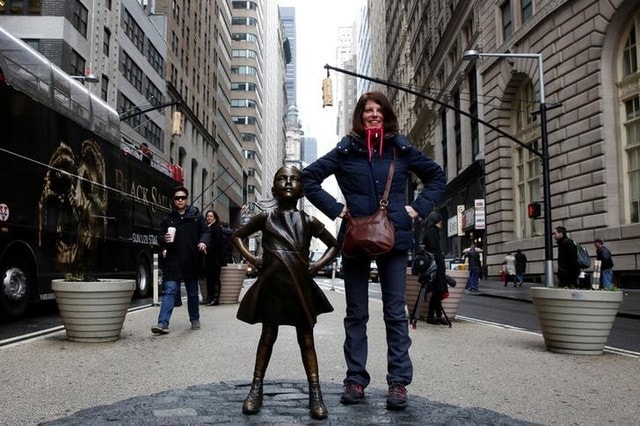 Although women have made some headway against the glass ceiling, State Street said one out of four of the companies that make up the Russell 3000 Index still have no female representation on their boards.

"Today, we are calling on companies to take concrete steps to increase gender diversity on their boards, and have issued clear guidance to help them begin to take action," State Street Global Advisors CEO Ron O'Hanley said in a statement.

Much the same as the charging bull, the little bronze girl by artist Kristen Visbal was put up in the wee hours of the morning as "guerilla art," McNally said. But, unlike the bull, the firm discussed it with the city beforehand so that it could remain at least temporarily.

"We're actively pursuing that it stays for a month," she said. "If the city decides that it should stay in perpetuity, we're absolutely on board with that."

The bull, sculpted by Italian-born artist Arturo Di Modica, was initially taken down after he quietly placed it in front of the New York Stock Exchange in December 1989. But it was later given a permanent home, about a five-minute walk away on Broadway, in response to public support.

(This story has not been edited by NDTV staff and is auto-generated from a syndicated feed.)
Comments
International Women's DayInternational women's day 2017Wall StreetArturo Di Modicawall street bull