On Putin's Birthday, Thousands In Russia Protest Asking Him To Quit

Heeding the call of jailed opposition leader Alexei Navalny to demand competitive elections, around 3,000 people rallied in Russia's second city and Putin's hometown while more than a thousand demonstrated in the centre of Moscow, AFP reporters said. 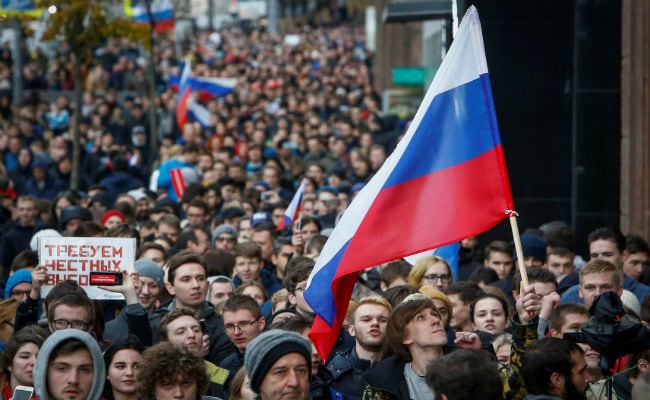 Saint Petersburg: Russian police violently broke up a rally in Saint Petersburg as thousands took to the streets across Russia Saturday on President Vladimir Putin's birthday, urging him to quit power.

Heeding the call of jailed opposition leader Alexei Navalny to demand competitive elections, around 3,000 people rallied in Russia's second city and Putin's hometown while more than a thousand demonstrated in the centre of Moscow, AFP reporters said.

But while police in rainy Moscow showed restraint, allowing the crowd of mostly young protesters to march in the city centre -- in an apparent effort to avoid clashes on Putin's birthday -- the rally in Saint Petersburg ended in violence.

At least 62 people were arrested, according to OVD-Info, a group that monitors politically motivated arrests.

Activists chanted "Shame" as helmeted police threw some protesters into police vans, injuring several demonstrators and forcing some to run for cover, an AFP reporter and witnesses said.

Igor Klimov, a 20-year-old protester, said he was not happy with Putin.

"He has been in power for as long as I can remember and there's corruption everywhere," he told AFP.

Photographs from the scene showed a woman clutching her bleeding head after being detained by officers at the unauthorised protest.

Rallies also took place in dozens of other cities across Russia, and 261 people in 26 cities were detained over the course of the day, according to the OVD-info group.

Fifty-seven protesters were detained in the central city of Yaroslavl, and 20 more people in Lipetsk, also in central Russia.

Amnesty International called on Russian authorities to  immediately release the protesters and investigate instances of violence.

"The Kremlin's intent is clear - to choke the life out of the protest movement," said Denis Krivosheev, Amesty's deputy director for Europe and Central Asia.

The protests -- called by Navalny after he was sent to jail for 20 days this week -- were markedly smaller than the rallies he mustered in March and June when tens of thousands took to the streets against corruption.

The number of people detained across Russia on Saturday is lower than the arrests during the rallies called by Navalny in March and June. Police detained more than 1,000 people in Moscow alone during the March demonstration.

In Moscow on Saturday, the crowd chanted "Happy birthday" and "Russia without Putin" and many held copies of the constitution and wave flags amid honks of support from passing cars.

Hundreds of police officers, some in riot gear and with dogs, were deployed to prevent people from going to Red Square.

Navalny, a charismatic anti-corruption campaigner who aims to run in a presidential election next March, was arrested late last month as he was planning to travel to a rally in a provincial city.

A court on Monday sentenced him to 20 days in jail on charges of repeatedly violating a law on organising public meetings.

Officials say he is not eligible to run for president because he is serving a suspended sentence for fraud.

'Important to have choice'

Svetlana Kiseleva, a 20-year-old student in Moscow, said she did not support Navalny but had joined the rally to demand political competition.

"It's important to have a choice, to have an opposition," she told AFP. "I still think he would be better than Putin anyway."

Putin, who has ruled since 1999, turned 65 -- the retirement age for Russian officials -- and many protesters urged him to step down.

He said this week he has not yet decided whether to seek another six-year term. But he is widely expected to run in -- and win -- the March election.

Navalny's campaign team had released a series of video addresses of prominent figures calling on Russians to take to the streets.

"Gulag is awaiting us without political competition," entrepreneur Evgeny Chichvarkin, who lives in self-imposed exile in Britain, said in the video.

Navalny, the Yale-educated lawyer with a street-smart image and a penchant for catchy slogans, compared life under Putin's regime to a forced diet of "turnip."

"If we do nothing, they will be feeding us this damn turnip for the rest of our lives. And our children too," he said in an address dictated from his cell this week.

Promoted
Listen to the latest songs, only on JioSaavn.com
The Kremlin said Putin received on his birthday "numerous congratulatory messages and telegrams" including from 11 heads of state and later met with members of the Russian security council to discuss Syria.

(Except for the headline, this story has not been edited by NDTV staff and is published from a syndicated feed.)
Comments
vladimir putinRussia