The supporters of former PM Imran Khan were criticising Marriyum Aurangzeb for paying foreign visits amid flood devastation across Pakistan. 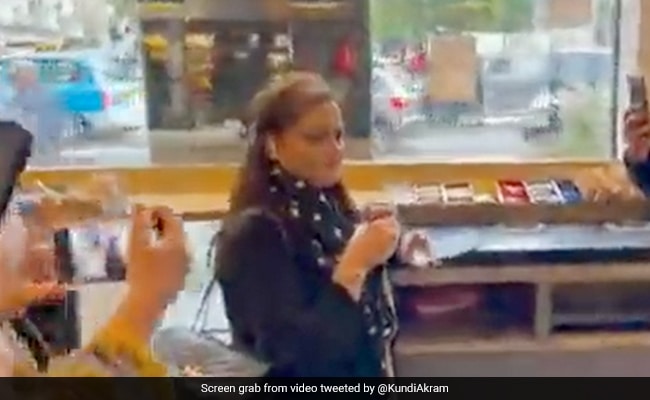 Marriyum Aurangzeb is currently in London to attend 77th session of UNGA.

According to news agency ANI, the supporters of the former Prime Minister were criticising Ms Aurangzeb for paying foreign visits amid flood devastation across Pakistan. However, the video showed Ms Aurangzeb, the daughter of ex-Pakistan Prime Minister Nawaz Shariff, remaining visibly calm even though demonstrators screamed at her with megaphones.

Marriyum Aurangzeb is currently in London as a member of the Pakistani delegation for the 77th session of the United Nations General Assembly (UNGA).

Addressing the incident on Twitter, the Pakistan minister said that she was sad to see the "toxic impact" Imran Khan's politics of hate and divisiveness have had on people. She stated that she answered each and every question of the riled-up crowd. "We will continue our work to counter Imran Khan's toxic politics and bring people together," she wrote on Twitter.

Sad to see the toxic impact IK's politics of hate & divisiveness has had on our brothers & sisters. I stayed & answered each & every question they had. Sadly, they are victims of IK's propaganda. We will continue our work to counter IK's toxic politics & bring people together https://t.co/KEgOPa5Y3p

Imran Khan established PTI (Pakistan Tehreek-e-Insaf) in 1996. He led the nation as the prime minister from 2018 until 2022.

Defence Minister Khawaja Asif stated that overseas Pakistanis are representing the "lowest level" of Pakistani society. "Giving this colour to political differences is a sign of bad training and a trend that is the height of intolerance. The violent trend in politics after Madhhab will destroy our society." Mr Asif said.

Planning Minister Ahsan Iqbal termed the heckling incident as the "most deplorable, condemnable and shameful act by PTI hooligans". He praised Ms Aurangzeb for "boldly" facing the crowd. "Truly a lioness!" he said.