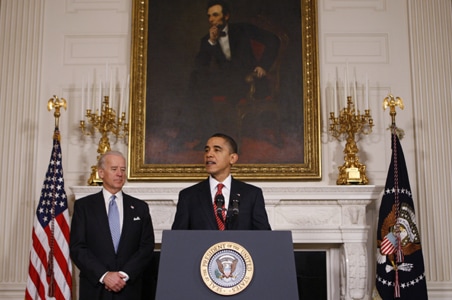 New York: President Barack Obama said Tuesday that the government had sufficient information to uncover the terror plot to bring down a commercial jetliner on Christmas Day, but that intelligence officials had "failed to connect those dots."

"This was not a failure to collect intelligence, it was a failure to integrate and understand the intelligence that we already had," Obama said after meeting with his national security team for nearly two hours. He added, "We have to do better, we will do better and we have to do it quickly. American lives are on the line."

The tone of the president's remarks on Tuesday - the sharpest of any of his statements since the incident nearly two weeks ago - underscored his anger over the lapses in intelligence and his efforts to minimize any political risks from his administration's response.

The president said he was suspending the transfer of detainees to Yemen from the military prison at Guantanamo Bay, Cuba. While he renewed his commitment to close the Guantanamo Bay prison, halting the transfer of detainees to Yemen, where an al-Qaida cell has been connected to the Christmas Day attack, underscores the difficulty facing the president in closing the detention center and reflects the intense criticism that Republicans have directed at the administration in recent weeks.

Obama also said that intelligence and law enforcement reviews of the terror plot would be completed this week and that he would announce additional security measures for air travelers in the coming days. It was his fullest and most forceful statement to date on the incident, in which a Nigerian man traveling to Detroit from Amsterdam tried to ignite an explosive mixture that could have brought down the Northwest Airlines flight and its 278 passengers.

"I want specific recommendations for corrective actions to fix what went wrong," Obama said, speaking in the Grand Foyer of the White House. "I want those reforms implemented immediately, so that this doesn't happen again and so we can prevent future attacks."

Obama's stark assessment that the government failed to properly analyze and integrate intelligence served as a sharp rebuke of the country's intelligence agencies, including the National Counterterrorism Center, the organization set up after the Sept. 11, 2001, attacks to ensure that the government had a central clearinghouse for spotting, assessing and thwarting terrorist threats.

But Obama insisted that he is not interested in getting into a blame game. White House officials said the president is standing by his top national security advisers, including those whose agencies failed to communicate with one another.

In a meeting Tuesday with those officials, the president called the events leading up to the Christmas Day attack a "screw-up," one White House official said, telling the assembled officials, "We dodged a bullet, but just barely." Obama, the official said, also told the group that he would not "tolerate" finger-pointing.

In his remarks to reporters after the meeting, the president called the threat against the United States "a challenge of the utmost urgency." He suggested that the passengers aboard the Northwest Airlines flight were lucky to skirt disaster and warned that future attacks might not be thwarted unless communication improved among intelligence officials.

"I will accept that intelligence by its nature is imperfect, but it is increasingly clear that intelligence was not fully analyzed or fully leveraged," Obama said. "That's not acceptable, and I will not tolerate it."

Dennis C. Blair, the director of national intelligence, said in a statement on Tuesday evening that the "intelligence community received the president's message today - we got it." He acknowledged the failures, but added, "We can and we must outthink, outwork and defeat the enemy's new ideas."

In the meeting, officials did not blame the organization of the intelligence or homeland security agencies, which were set up under the Bush administration, but rather how the information was analyzed and not shared among agencies.

"I don't think it's a structure problem," said Denis McDonough, the chief of staff of the National Security Council. "This isn't a problem of intelligence sharing, but rather a problem related to insuring that all the wealth of information we had was appropriately correlated, analyzed and highlighted."

The decision to suspend the transfer of detainees from the military prison at Guantanamo Bay to Yemen because of the deteriorating security situation there and the rising terror threats emanating from the country was another tacit acknowledgment of how difficult it will be to close Guantanamo. Nearly half of the remaining detainees at Guantanamo are from Yemen, senior administration officials said.

Obama was already poised to miss his self-imposed one-year deadline for shuttering the prison by Jan. 22, but evidence that al-Qaida's branch in Yemen was behind the failed Christmas Day attack means the administration will fall even further behind schedule.

Obama inherited 242 detainees at Guantanamo when he came into office, and so far has released or transferred 44. Of the 198 remaining, about 92 are from Yemen. Of those, just under 40 of them have been cleared for release, a senior administration official said.

But the official said the administration had already decided before the Christmas Day attack that it would slow down the release of the remaining Yemeni detainees. The administration sent six detainees back to Yemen just before Christmas, in a move that drew criticism from Republicans including Sens. Lindsey Graham of South Carolina and John McCain of Arizona, as well as Sen. Joseph I. Lieberman of Connecticut, an independent, although that criticism did not come until after the administration had already sent the men back.

Obama did not disclose what changes may be coming at airport security checkpoints, but transportation security officials have already been in contact with equipment manufacturers to find out what capacity they have to ramp up production of whole-body scanners, which can check underneath clothing to look for hidden weapons or explosives.

So far, there are only 40 of these devices in place at 19 airports nationwide in a domestic aviation system that has more than 2,200 checkpoint security lanes. An additional 150 machines were recently ordered and in the process of being delivered.

Promoted
Listen to the latest songs, only on JioSaavn.com
In the coming weeks, industry officials said they expected a request for 300 more machines, which would result in a total nearly 500 devices, still covering just a small fraction of the checkpoint lanes, but perhaps enough to have them at most of the major airports in the United States. The machines cost about $190,000 a piece.