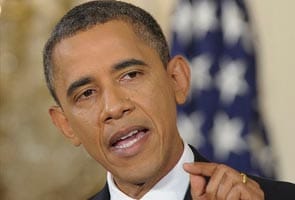 Honolulu, Hawaii: US President Barack Obama announced on Saturday the framework for a vast free trade agreement spanning the Pacific as he sought a new era of American leadership in a fast-growing region.

"Together we can boost exports and create more goods available for our consumers, create new jobs, compete, win in the markets of the future," Obama said, framing the Asia-Pacific as the key to restoring global economic growth.

Leaders from nearly 20 nations, including China and Japan, gathered for weekend meetings in Hawaii, where sunbathers and surfers had to skirt beach barricades and traffic snarls frustrated the famously laid-back locals.

Obama said nine countries had reached a "broad outline" on a free trade pact called the Trans-Pacific Partnership, or TPP. "Our goal is by next year to get the legal text for a full agreement."

Japanese Prime Minister Yoshihiko Noda gave a major boost ahead of the summit as his nation became the 10th member of the TPP, meaning that it will cover more than one-third of the global economy.

"I have been extremely impressed already with the boldness of his vision," Obama said after meeting the newly installed leader in Hawaii ahead of Sunday's formal opening of the Asia-Pacific Economic Cooperation (APEC) forum.

Obama has set a goal of doubling exports to create badly needed jobs at home. But he also hopes that the TPP will serve as a strategic linchpin as the United States winds down wars in Iraq and Afghanistan and refocuses on Asia.

"The United States is a Pacific power and we are here to stay," Obama told a meeting with chief executives of major companies from the APEC region.

Pressing the US case for the TPP, Obama said that the emerging agreement would be a 21st-century deal that ensures high environmental and labor standards and addresses new barriers other than tariffs.

"I'm confident we can get this done," he said.

The TPP was signed in 2005 as an obscure agreement among Brunei, Chile, New Zealand and Singapore. Obama suddenly turned it into the cornerstone of US free trade drive, with Australia, Japan, Malaysia, Peru, the United States and Vietnam now also in the talks.

In a joint statement, leaders of TPP nations said they shared a "strong interest" in expanding their membership.

The major outlier of the TPP is China, the world's second largest economy. Obama, shortly before scheduled talks with Chinese President Hu Jintao, warned that Beijing must "play by the rules" in international trade and intellectual property protection.

The United States has not explicitly ruled out China's entrance into the TPP, but Secretary of State Hillary Clinton has linked the trade agreement to fundamental values including openness and labor standards.

China's state-run Global Times denounced the TPP and Clinton, saying that her remarks "fueled speculation about Washington's attempt to contain China" through the emerging trade agreement.

"If the US is sincerely committed to the success of its TPP initiative, Clinton should not have adopted this tone," it said.

Despite the US optimism about the TPP, Obama acknowledged that there would be "difficulties" and "sensitivities" by member countries. Most experts believe it will take years before a concrete agreement can come to fruition.

The details of the trade agreement remain vague and opposition has already built in several countries. Some farm groups in Japan and the United States have both voiced alarm that they would be swamped by global competition.

US automakers have also been concerned about the entrance of Japan, fearing that duty-free access for the country of auto giants such Toyota will deal a new blow to struggling Detroit.

APEC covers 21 economies and more than half of the global economy. Obama plans a Hawaiian reception on the beach, in a rare informal opportunity for top world leaders.

Hawaii officials have embraced the summit as a chance to showcase the islands's famed hospitality, but it has brought the heaviest security since the wake of the Japanese attack on Pearl Harbor nearly 70 years ago.

Thai Prime Minister Yingluck Shinawatra postponed what would have been her debut on the world stage at APEC to deal with the kingdom's worst floods in half a century, while Mexican President Felipe Calderon canceled after his interior minister died in a helicopter crash.