Wood, a single mom, said the one thing she did before she made Pinkard the offer was talk to her sons about taking in Pinkard. 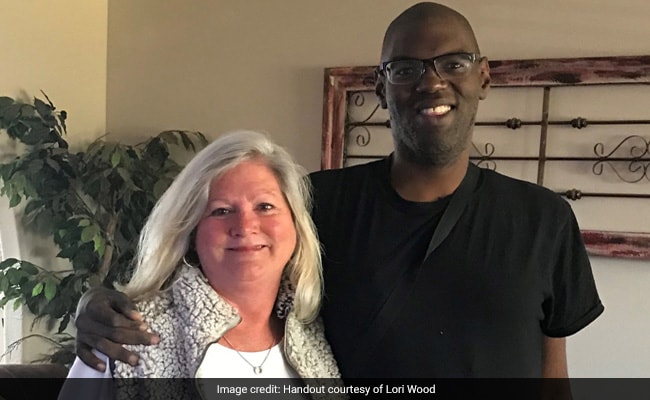 Wood, 57, who has been a nurse for 35 years, said she had never done anything like this before.

But Pinkard was homeless, and he did not have a support system to help care for him after a transplant - and that disqualified him from the waiting list for a new heart.

"It was a pretty scary situation to be in," said Pinkard, 27, who had been living in a men's shelter and working as an office clerk in Warm Springs, Georgia. "I had no idea what I was going to do."

Then in December - four months after he learned he needed a new heart - Pinkard landed in the hospital again, but this time he was assigned to nurse Lori Wood. He was her patient for two days at Piedmont Newnan Hospital when she figured out what was going on and stunned him with a remarkable offer: He could move in with her. She could become his guardian and look after him.

"I couldn't believe that somebody who had known me only two days would do this," he said. "It was almost like a dream."

Wood, 57, who has been a nurse for 35 years, said she had never done anything like this before. She generally doesn't blur the lines between her personal life and her professional work at the hospital, which is about 40 miles from Atlanta. But something about Pinkard was different. He didn't have anybody in the world looking out for him - and that was standing between him and a new heart.

"That can be very frustrating if you know a patient needs something, and for whatever reason they can't have it," she said. "It gnaws at you."

She said her frustration grew when there were medical tests he needed to have but he wasn't getting them because he wasn't a candidate for a new heart.

"At some point, God places people in situations in your life, and you have a choice to do something about it," she said. "For me, there was no choice. I'm a nurse; I had an extra room. It was not something I struggled with. He had to come home with me."

So the day Pinkard was discharged, Wood loaded him into her car and brought him to her home, where she lives with one of her three grown sons, Austin Wood, at their farmhouse in Hogansville, about an hour south of Atlanta.

Pinkard had nothing more than a cellphone to his name. Wood bought him a new bedroom set and told him, 'I want you to make this room your own. I want you to feel at home.' "

"She's been 'Mama' to me since January," said Pinkard, who underwent a successful seven-hour heart transplant on Aug. 1 and is expected to be cleared to return to work soon.

"From the day I went home with her, she felt like my second mom."

Pinkard, who has autism, first learned he needed a new heart in August 2018 after he had shortness of breath and unexpectedly passed out at work. He has been in and out of the hospital since.

With his mother living in a rehab center, he had been on his own since 2014, after his grandmother (and guardian) died and living arrangements with another relative ended.

Wood was recently honored by Piedmont Healthcare for "going above and beyond" for Pinkard. The medical group also produced a video featuring the two.

"Lori gave Jonathan a new life, a new heart and a new family," said Piedmont Newnan chief executive Mike Robertson. "Because of her and what she's done, we all want to become better people and caregivers."

Wood, a single mom, said the one thing she did before she made Pinkard the offer was talk to her sons about taking in Pinkard.

"They all thought it was a great idea," she said.

On the first day he was in the house, she and Pinkard learned they had something in common: They both have a love for "Family Feud" and football.

"I went to the store for groceries, and when I came home, he was watching 'Family Feud' - the same show I always have on after work," Wood said. "So right then, I said, 'We're going to get along fine.' "

When she learned that Pinkard was also a college football fan, she couldn't help teasing him. "I'm a Georgia fan, and he's an Alabama fan," she said. "But I'll try not to hold that against him."

Wood said she enjoys coming home from her nursing job to find Pinkard waiting on the front porch, waving and smiling every afternoon.

"Before I even get out of the car, he's right there, hollering, 'Hey, Mama!' and wanting a hug," she said.

Wood drives Pinkard to his doctor appointments, ensures he takes each of the 34 pills he now requires daily, and does her best to steer him away from frozen pizza and other foods that are high in sodium.

In July, she filed the paperwork and legally became his guardian before the transplant. But to both of them, she "adopted" him the day she brought him home.

"I'm teaching him how to cook healthy meals, with a goal of him becoming more independent," Wood said. "Jonathan wants a girlfriend; he wants to get a car. He's welcome to stay here as long as he wants to, but I also know that he deserves to have his own life. So at some point, when he's ready, we're going to try to make that happen."

Until then, Pinkard says he is happy with his new heart and his new family.

(This story has not been edited by NDTV staff and is auto-generated from a syndicated feed.)
Comments
Lori WoodJonathan PinkardHeart transplant