'No Plan B As No Planet B': World Leaders Slam US For Exiting Paris Deal

Germany, France, Italy issued a joint statement criticising US President Donald Trump's decision and reaffirmed that the Paris accord was "not renegotiable". 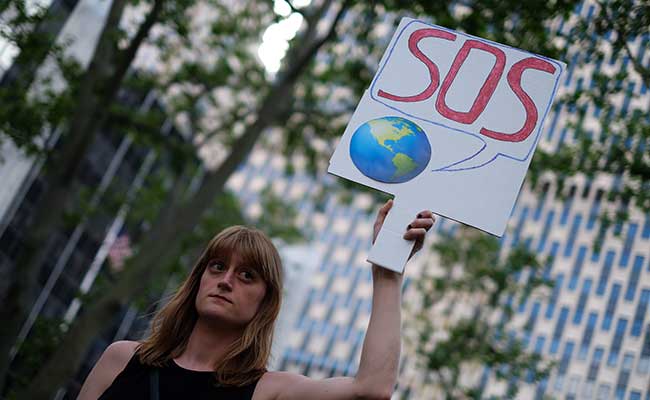 Donald Trump said the Paris climate deal was unfair to the United States.

Brussels: Dismayed European and Chinese leaders meet today at a Brussels summit in a bid to fill a void in the global push to fight climate change left by the US pullout from the Paris pact. In a potentially dramatic shift in diplomatic roles, the European Union now aims to join heavyweight China in trying to galvanise the world into implementing the landmark 2015 agreement - but minus the planet's second biggest carbon polluter.

In announcing the pullout, Mr Trump said the Paris pact was a bad deal that may or not be renegotiated, adding it punished the United States and was too easy on China, India and Europe. The three biggest economies in continental Europe - Germany, France, Italy - issued a joint statement criticising US President Donald Trump's decision and reaffirmed that the Paris accord was "not renegotiable".

European Commission President Jean-Claude Juncker, European Council President Donald Tusk and Chinese Premier Li Keqiang are vowing to forge ahead with the Paris agreement without the US when they meet in Brussels today.

Echoing the joint statement by Germany, France and Italy, Mr Juncker denounced as "seriously wrong" US President Donald Trump's shock announcement to pull out of the deal that his predecessor Barack Obama and Chinese leaders had been instrumental in brokering. Echoing earlier remarks from his boss, EU commissioner for climate action and energy, Miguel Arias Canete, pledged continued "global leadership" on climate change. 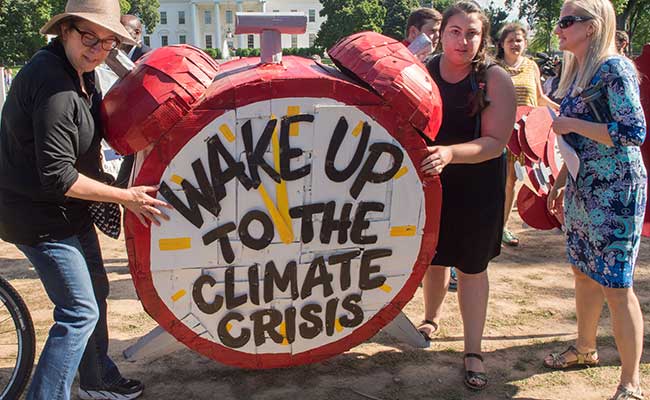 Mr Trump's "announcement has galvanised us rather than weakened us, and this vacuum will be filled by new broad committed leadership," Mr Canete said.

"Europe and its strong partners all around the world are ready to lead the way," the Spanish commissioner said on the eve of the summit.

French President Emmanuel Macron on Thursday categorically ruled out any renegotiation of the Paris climate accord and said U.S. President Donald Trump's decision to withdraw would harm American interests and citizens.

"I tell you firmly tonight: We will not renegotiate a less ambitious accord. There is no way," said Macron, who took office less than a month ago.

In talks with German Chancellor Angela Merkel in Berlin on Thursday, Chinese Premier Li said it was in China's own interest to press ahead "steadfastly" with the Paris deal, and urged other countries to do likewise.

China, the world's biggest greenhouse gas emitter, has been investing billions in clean energy infrastructure, as its leaders battle to clear up the notorious choking pollution enveloping its biggest cities, including Beijing.

China and the US, the second biggest polluter, are together responsible for some 40 per cent of the world's emissions and experts had warned that it is vital for both to remain in the Paris agreement if it is to have any chance of succeeding.

But Mr Canete said the EU will work with existing partners and forge new alliances, including with the world's largest economies as well as the many US citizens, businesses and communities that support the Paris agreement.

The Paris agreement commits signatories to efforts to reduce greenhouse gas emissions that cause global warming, which is blamed for melting ice caps and glaciers, rising sea levels and more violent weather events.

They vowed steps to keep the worldwide rise in temperatures "well below" two degrees Celsius (3.6 degrees Fahrenheit) from pre-industrial times and to "pursue efforts" to hold the increase under 1.5 degrees Celsius.

Mr Juncker has noted that it would take three or four years to exit the Paris deal, and revealed that world leaders had tried in vain to explain that to Mr Trump at the G7 summit a week ago.

A draft joint summit statement seen by AFP said the EU and Chinese leaders will stress "their highest political commitment" into implementing all aspects of the Paris deal.

Promoted
Listen to the latest songs, only on JioSaavn.com
They vow to "significantly intensify" their political, technical, economic and scientific cooperation on climate change and clean energy to help the world shift to an economy based on low greenhouse gas emissions.

Hoping to make the climate fight a "main pillar" of their bilateral partnership, including economic ties, the two underlined that their cooperation will fuel job creation, investments and economic growth, the statement said.