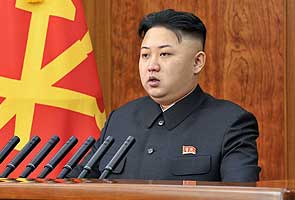 Military tensions on the Korean peninsula have risen to their highest level for years, with the communist state under the youthful Kim threatening nuclear war in response to UN sanctions imposed after its third atomic test last month.

It has also announced its unilateral shredding of the 60-year-old Korean War armistice and non-aggression pacts with Seoul in protest at a joint South Korean-US military exercise that began on Monday.

While most of these statements have been dismissed as rhetorical bluster, the latest threat to the border island of Baengnyeong, which has around 5,000 civilian residents, appears credible and carries the weight of precedent.

In 2010, the South Korean naval vessel Cheonan was sunk in the area of Baengnyeong with the loss of 46 lives, and later that year North Korea shelled the nearby island of Yeonpyeong, killing four people.

On a visit on Monday to frontline artillery units, Kim Jong-Un briefed officers on their mission "to strike and wipe out the enemies" on Baengnyeong and turn the island into a "sea of fire".

"Once an order is issued, you should break the waists of the crazy enemies, totally cut their windpipes and thus clearly show them what a real war is like," Kim was quoted as saying by the Korean Central News Agency.

An administrative official on Baengnyeong, Kim Young-Gu, said civilian emergency shelters on the island had been fully stocked and all village councils put on high alert.

"It's not like there's a mass exodus of panicked islanders to the mainland. But to be honest with you, we're a bit scared," he told AFP by telephone.

Residents on a number of frontline islands have reportedly taken to sleeping in their clothes in preparation for a night-time alert.

The crisis represents an early test for South Korea's new President Park Geun-Hye, who was sworn in only two weeks ago, while analysts worry about just how far the inexperienced Kim Jong-Un is willing to go.

A domestic political row has hindered key appointments to Park's cabinet, and the nominee for the defence portfolio, Kim Byung-Kwan, warned that delaying his confirmation posed enormous risks.

"I feel a tremendous sense of danger," he told a televised press conference. "There should never be a slightest vacuum in national defence at any moment. And now is a perilous time."

Defence Ministry spokesman Kim Min-Seok said the North was trying to exert "psychological pressure" on South Korea, and was expected to launch full-scale military manoeuvres in the coming days.

"If the North provokes us, we will respond in ways that will cause them more harm," he said.

In a move likely to provoke a fresh round of furious rhetoric from Pyongyang, the United States on Monday slapped sanctions on North Korea's primary foreign exchange bank and four senior officials.

Past sanctions have failed to persuade Pyongyang to abandon its nuclear programme, but the international community hopes measures targeting financial lifelines can slow down the process and curb proliferation.

The US measures come on top of financial sanctions imposed last week by the UN Security Council including China, North Korea's economic and diplomatic patron.

US national security advisor Tom Donilon labelled the recent threats emanating from Pyongyang as "hyperbolic", and stressed the United States would use the "full range of our capabilities" to protect the US and its allies such as South Korea.

Pyongyang came under attack on another front at the UN Human Rights Council in Geneva, where the UN special rapporteur on human rights in North Korea laid out a litany of abuses and crimes against humanity.

He highlighted concerns about a network of political prison camps believed to hold at least 200,000 people, and called for an international commission of inquiry into North Korea's human rights record.