Leaders Of Both Koreas Meet, Embrace Ahead Of Denuclearisation Talks

Accompanied by their wives, Kim Jong Un and Moon Jae-In exchanged pleasantries for a few minutes ahead of a military welcome ceremony as hundreds of people lining the tarmac cheered, waving North Korean flags and unification ones showing an undivided peninsula. 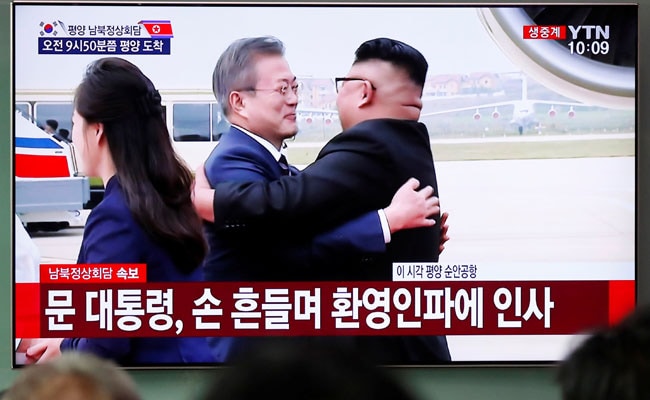 South Korean President Moon Jae-in arrived in Pyongyang Tuesday for his third summit this year with Kim Jong Un as he seeks to reboot stalled denuclearisation talks between North Korea and the United States.

Kim welcomed his visitor at Pyongyang's international airport -- where he supervised missile launches last year as tensions mounted -- the two men embracing after Moon walked down the steps of his aircraft.

Accompanied by their wives, they exchanged pleasantries for a few minutes ahead of a military welcome ceremony as hundreds of people lining the tarmac cheered, waving North Korean flags and unification ones showing an undivided peninsula.

But the South's own emblem was only visible on Moon's Boeing 747 aircraft.

"Let's open an era of peace and prosperity with the solidarity of one people," read a hoarding displayed outside the terminal.

The nuclear-armed North invaded its neighbour in 1950, starting the Korean War, although it now regularly stresses the importance of reunifying with the now far wealthier South.

Moon -- whose own parents fled the North during the three-year conflict -- is on a three-day trip, following in the footsteps of his predecessors Kim Dae-jung in 2000 and mentor Roh Moo-hyun in 2007.

The North's Korean Central News Agency (KCNA) said the summit "will offer an important opportunity in further accelerating the development of inter-Korean relations that is making a new history." The first visit by a South Korean leader to Pyongyang in a decade is also the men's third meeting this year after two previous summits in April and May in the Demilitarized Zone that divides the peninsula.

Moon has been instrumental in brokering the diplomatic thaw that saw a historic summit between Kim and US President Donald Trump in Singapore in June, where Kim backed denuclearisation of the Korean peninsula.

But no details were agreed and Washington and Pyongyang have sparred since over what that means and how it will be achieved.

The US is pressing for the North's "final, fully verified denuclearisation", while Pyongyang wants a formal declaration that the 1950-53 Korean War is over and has condemned "gangster-like" demands for it to give up its weapons unilaterally.

The dovish South Korean president will hold at least two meetings with the North's leader, where he will try to convince Pyongyang to carry out substantive steps towards disarmament.

"If this visit somehow leads to the resumption of the US-North Korea talks, it would be significant enough in itself," he was quoted as saying before departure.

But analysts played down expectations.

The meeting "will probably generate rosy headlines but do little to accelerate efforts to denuclearise North Korea", Eurasia Group said in a note.

Kim would push for enhanced North-South cooperation "especially in areas that promise economic benefits for the North", it added. 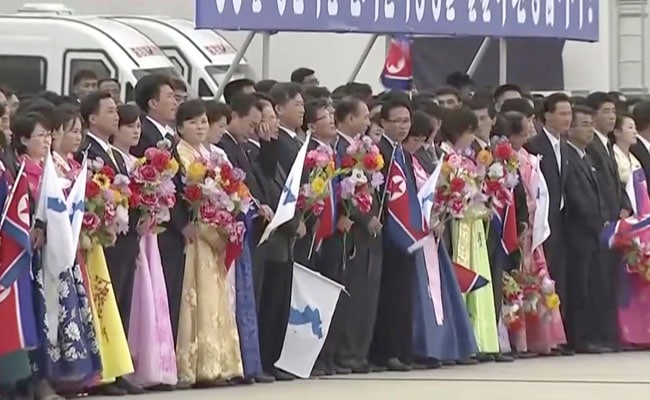 "Progressives inside and outside Moon's government will have strong incentives to inflate the summit's accomplishments, initially obscuring what will likely be a lack of major deliverables."

Moon was accompanied by business tycoons including Samsung heir Lee Jae-yong and the vice chairman of Hyundai Motor, and is scheduled to visit key sites in Pyongyang with his delegation.

Moon -- whose poll ratings have been falling in the face of a struggling economy in the South -- has been pushing inter-Korean cooperation but South Korean media have urged caution, calling for such schemes to await substantial progress towards denuclearisation.

The president's office has said the inclusion of the businessmen was "not special," given the heads of major conglomerates had been in Pyongyang for the previous inter-Korean summits in the city.

"Quite a number of people are now fed up with the surprise events between the leaders," the conservative Chosun Ilbo newspaper said in an editorial Tuesday.

"President Moon must head to Pyongyang with the resolve that the first, second, third agenda of this summit is denuclearisation."

Other issues on Moon's agenda include improving inter-Korean ties and easing military tensions on the peninsula.

Seoul said that could lay the groundwork for a formal declaration on the Korean War, when hostilities ended in an armistice rather than a peace treaty -- implying that such an announcement was unlikely during the trip.

(Except for the headline, this story has not been edited by NDTV staff and is published from a syndicated feed.)
Comments
Kim Jong UnMoon Jae-InNorth Korea South Korea Summit