No plans to run for US Vice President: Nikki Haley 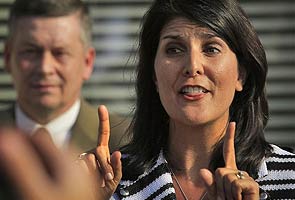 Washington: South Carolina's Indian-American Governor Nikki Haley, billed as a rising star in the Republican party, says that she has no plans to run for US Vice President as a running mate of the presumptive Presidential nominee Mitt Romney.

"I would say thank you. But no thank you," she told PTI on a question about her response if Mr Romney made such a proposal.

Ms Haley's name is doing the rounds along with another American-Indian Bobby Jindal, Governor of Louisiana, as possible running mates of Mr Romney.

"The people of South Carolina took a chance on me, and I intend to do the job they hired me to do, and continue to deliver results to the people," she said, indicating that she would decline any offer to run for the second highest Constitutional post in the US.

In a wide ranging interview to PTI, Ms Haley, 40, came across as an Indian-American who pins for the home of her ancestors and who held Mahatma Gandhi in great admiration.

Ms Haley, who created waves last year by becoming the first Indian-American woman governor, wants to come to India, to boost investments by Indian companies in her state of South Carolina. She said that she has not been to her country of origin since she was a young girl.

She has just penned a book 'Can't is Not An Option' and in the interview she urged the strong Indian American community to "get involved" in country's mainstream politics.

"Anyone who reads my book will see that I love leaders like Mahatma Gandhi who encourage people, as I always do, to find the power of their voice," she said, when asked if Gandhi was still relevant today.

Ms Haley said that she would love to visit the country of her parents. "Although I haven't visited since I was a young girl, I will never miss an opportunity to sell South Carolina and would love to visit India. We are always excited to talk about the great things our administration is doing to make our state the most competitive in the country for business development," she added.

"We absolutely do, and were honoured to have some of them visit South Carolina for our inauguration," Ms Haley replied when asked if she still maintains contacts with her relatives and family members in India.

Recently the Indian Ambassador to the US, Nirupama Rao, had visited South Carolina and had meetings with her, which left a lasting impression on Ms Haley.

"It was an honour to host Ambassador Rao, a woman of great intelligence, strength and grace. As I became governor, what I saw was an opportunity, it's an opportunity to partner with a country that continues to be strong when it comes to jobs and innovation. And so what I've asked is, 'how do we get Indian companies to come and do business in South Carolina?' I talked to the ambassador, and we are going to continue to talk," she said.

Nikki Haley shares her inspirational memoir of family, hope, and the power of the American Dream in her widely acclaimed book.

"Get involved" is her message to the large Indian American community here.

"As you can read in our book, we always say great things about India, and one of my favorite things is how committed Indian-American citizens are in America.I love the fact that they are great at medicine, great at engineering, great at business and less dependent on government assistance," she said.

Born as Namrata Randhawa to Sikh immigrant parents from Amritsar, Ms Haley said that the book was her way of bragging about the great state of South Carolina and remind people that, only in this country, can someone fight all odds and succeed.

Promoted
Listen to the latest songs, only on JioSaavn.com
"When we ran for office, we heard from people that they'd never run for office if they had to go through what we went through.

But what we wanted people to take away from our story is the exact opposite," she said.