'No Nile, no Egypt', Cairo warns over Ethiopia dam 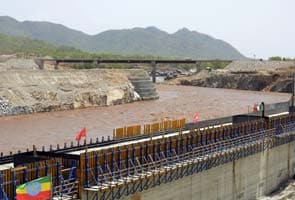 Cairo: Egypt's foreign minister, vowing not to give up "a single drop of water from the Nile", said on Sunday he would go to Addis Ababa to discuss a giant dam that Ethiopia has begun building in defiance of Cairo's objections.

Speaking to Egypt's state news agency MENA two days after the Ethiopian government flatly rejected a request from Cairo to halt the project, Mohamed Kamel Amr underlined that Egyptians view any obstacle to the river as a threat to national survival.

"No Nile - no Egypt," he said, highlighting the pressure on the Egyptian government, whose popularity is wilting in the face of economic troubles, to prevent the hydro power plant cutting already stretched water supplies for its 84 million people.

Last week, Ethiopia summoned the Egyptian ambassador after politicians in Cairo were shown on television suggesting military action or supporting Ethiopian rebels - a mark of the threat felt in Cairo from the plan to dam the Blue Nile, the tributary that supplies the bulk of water downstream in Egypt.

"Egypt won't give up on a single drop of water from the Nile or any part of what arrives into Egypt from this water in terms of quantity and quality," Amr told MENA, noting Egypt has little rainfall and is effectively desert without its great river.

Speaking at a news conference, he declined to detail the action Egypt might take next but noted Ethiopian assurances that Africa's biggest hydro station would not cut water supplies:

"We have a plan for action, which will start soon," Amr said. "We'll talk to Ethiopia and we'll see what comes of it.

"Ethiopia has said it will not harm Egypt, not even by a litre of water. We are looking at ... this being implemented."

Nations which share the Nile have long argued over the use of its waters, repeatedly raising fears that the disputes could eventually boil over into war. Egypt, struggling with a shortage of cash and bitter internal political divisions following a 2011 revolution, called on Ethiopia to stop work after engineers began diverting the course of the Blue Nile late last month.

In Addis Ababa, a government spokesman called that request a "non-starter" and dismissed threats from Cairo of "sabotage" and "destabilisation", saying attempts by Egypt under its previous military rulers to undermine Ethiopian leaders had failed.

The possible effects of the $4.7-billion Grand Renaissance Dam, some 40 km (25 miles) from Ethiopia's border with Sudan, have been disputed and full details are unclear.

Promoted
Listen to the latest songs, only on JioSaavn.com
While letting water through such dams - of which Egypt, Sudan and Ethiopia already have several - may not reduce its flow greatly, the filling of the reservoir behind any new dam means cutting the river's flow for a time. Evaporation from reservoirs can also permanently reduce water flowing downstream.

Now 21-percent complete, the new dam on the Blue Nile will eventually have capacity of 6,000 megawatts and is central to Ethiopia's plans to become Africa's leading exporter of power.
© Thomson Reuters 2013