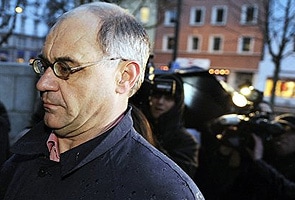 He has, however, escaped jail in breach of bank secrecy laws.

Elmer was acquitted by the district court in Zurich of accusations of making a bomb hoax that were levelled by the public prosecutor during the one day trial.

Judge Sebastian Aeppli sentenced the former banker to a suspended fine of 7,200 Swiss francs (5,500 euros), noting that Elmer had "for years been a part of the banking world" and had "benefited" from this.

His motives in handing over a set of bank client data to website WikiLeaks in 2007 were therefore not to fight tax evasion, but stemmed from his dismissal from Julius Baer five years earlier, said the judge.

Elmer has claimed that he wanted the world to know the truth about money concealed in offshore accounts and tax evasion as well as the systems in place to keep it secret.

In court, he described the bank's activities as "immoral, not conform with ethics" and said they "took a criminal turn."

He denied alleged threats but acknowledged that he had sent data to Swiss tax authorities.

Defence lawyer Ganden Tethong Blattner said in the trial on Wednesday that Elmer was engaged in a "David against Goliath" battle.

She argued that Swiss banking secrecy law was not applicable in the Cayman Islands, the Caribbean offshore banking haven where Elmer worked for the Julius Baer Banking and Trust Company.

However, public prosecutor Alexandra Bergmann contested the former banker's claim to be banking secrecy's whistleblower, arguing that he had only portrayed himself as such after he was dismissed.

Two days before his court appearance, Elmer handed over another two CD-ROMs of bank information to WikiLeaks founder Julian Assange at a press conference in London on Monday, saying that the data stemmed from at least three financial institutions and covered a period from 1990 to 2009.

According to the former banker, the clients listed on the two latest discs include about 40 politicians, multinational companies and financial institutions from the United States, Europe and Asia.