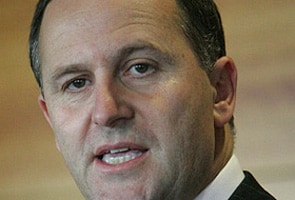 Mr Key made the alleged remark on Friday when telling school students in Dunedin about time he and his son had spent with the LA Galaxy player in 2008, Radio New Zealand reported.

Mr Key refused to confirm or deny making the comment on Monday and told talkback radio he did not owe anyone an apology, suggesting the conversation may have been misheard.

"That is someone that thinks they've overheard a conversation I've had," he told Newstalk ZB.

"It was a private conversation. I was talking to a few people and that's what he (the reporter) thought he heard."

Mr Beckham visited New Zealand in 2008 for an exhibition match between the LA Galaxy and the Oceania All-Stars in Auckland.
Comments
David Beckham 'jibe'