"Nice To Be Back", Says New Zealand's Prime Minister After Maternity Leave

Many see the 38-year-old premier's pregnancy as symbolising progress for women in leadership roles when it comes to giving birth while in office. 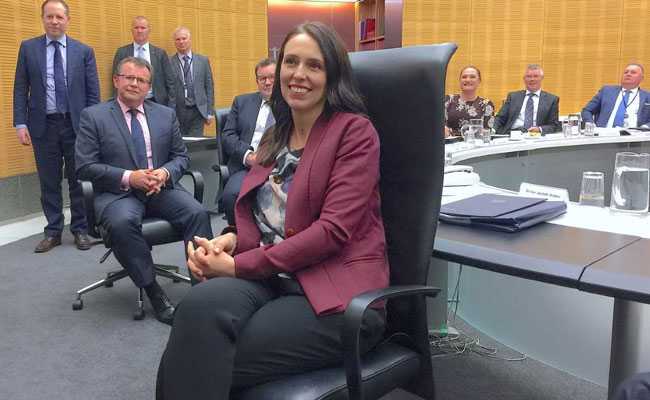 She is the second woman in the world after Benazir Bhutto to give birth during office term. (Reuters)

New Zealand's Prime Minister Jacinda Ardern returned to Parliament on Monday to run her first cabinet meeting, six weeks after giving birth to her daughter, becoming only the second elected leader to do so in office.

Ministers applauded as Ardern entered the cabinet meeting room and took her place beside Deputy Prime Minister Winston Peters, thanking him for running the country, allowing her to become its first premier to take maternity leave when in office.

"The last six weeks have been wonderful not only because of the birth of our healthy daughter but because we have been gifted by this cabinet, by the people of New Zealand, this time together," Ardern said.

"It's really, really nice to be back amongst you all," she told colleagues. "Shall we get on with it?"

Ardern's daughter, Neve Te Aroha, did not accompany her to the meeting. But steps to make parliament more baby-friendly allow her to cuddle with her mother during debates and swim in the legislators' pool.

Many see the 38-year-old premier's pregnancy as symbolising progress for women in leadership roles, as, in giving birth while in office, she followed Pakistan's Benazir Bhutto in 1990.

Ardern officially returned to work on Thursday from her home in Auckland and flew to the capital Wellington on Saturday to be greeted by a high school choir at the airport, where she spoke to reporters with the baby asleep in her arms.

Ardern, who is breastfeeding, was accompanied by partner Clarke Gayford, who is caring for Neve full-time. Their plans for the weekend included setting up second-hand baby furniture at Premier House, her official residence, she told media.

Economic fundamentals and government finances were strong, she told reporters after the meeting, which lasted most of the afternoon. She added that she would work to communicate government economic plans to businesses, to steer the economy away from reliance on housing and immigration.

"That does mean we are modernising our economy and with change comes uncertainty," she said, adding that growing turbulence in world trade was probably worsening business gloom.

Ardern launched the "trade for all" agenda, a series of public meetings that aims to broadcast the benefits of trade and keep growing global protectionism from spreading in New Zealand.

"We wanted..to develop our principles and values that we as a government are pursuing in our trade agreements that has buy-in for all of New Zealand," she added.