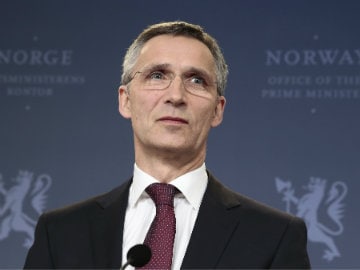 Oslo, Norway: Norway's Jens Stoltenberg brings close Russia ties to his new job as NATO chief, equipping him with a potentially key asset as tensions with the Kremlin hover at post-Soviet highs.

The former Norwegian prime minister -- the first NATO secretary general from a country bordering Russia -- is known for his good relations with President Vladimir Putin and Prime Minister Dmitry Medvedev.

During his decade in power, the two countries signed milestone agreements on the delineation of their frontier in the Barents Sea and on visa exemptions for their border populations.

An economist by training, the former Labour Party head has never shown any particular fondness for defence or security matters.

But his experience has left him with a strong international network and honed his skills as a cross-border negotiator, both of which could prove essential.

The 55-year-old will take office on Wednesday, at a moment in history when NATO's face-off with Russia over Ukraine has sparked tensions not seen since the collapse of the Soviet bloc.

"It's very hard to anticipate how he will behave in this position regarding his rather positive past with Moscow," said Vivien Pertusot at the French Institute of International Relations in Brussels.

"He's been extremely silent these last months, since his appointment became public. Will he follow the firm steps of (his Danish predecessor Anders Fogh) Rasmussen or will he try to become a soothing mediator?"

Despite unrest in several countries of interest to NATO, including Ukraine, Syria, Libya and Afghanistan, Stoltenberg has remained tight-lipped.

The only hint he has given as to his stance was when he told Norwegian news agency NTB on September 23 that "continuing as before (with Russia) is not an option".

"It is Russia that has chosen a more aggressive approach. The result is that we have not been able to follow up on our initial hope of a close and tight partnership," he said.

Paradoxically, NATO's new secretary general was once a staunch opponent of both the Western military alliance and the European Union, two organisations with which he has eventually come to terms.

As a long-haired teenager in the 1970s, he threw stones at the US embassy in Oslo in reaction to the Vietnam War.

But under his leadership in the 1980s, Norway's Labour Youth went from advocating the country's exit of NATO to rallying to the cause of the Atlantic alliance.

Already a minister, he took part in an Oslo-Paris bicycle relay in 1995 to protest French nuclear testing at Mururoa Atoll.

Born into a political family -- his father was minister of defence and then of foreign affairs, his mother a deputy minister -- the married father of two also devoted the majority of his career to politics.

After entering parliament in 1991, the tall, blue-eyed career politician rose rapidly through the ranks, becoming minister of energy and then of finance, before being named the country's youngest prime minister in 2000, the day after his 41st birthday.

He only kept that position briefly, but returned to power in 2005 and stayed on at the head of government until October last year.

Under his leadership, the Scandinavian country participated in the war in Afghanistan and contributed to the air strikes against Libya's Moamer Kadhafi.

Oil-rich Norway, traditionally pacifist but with strong Atlantic ties, is one of the few NATO countries that has increased its defence budget in recent years, when most nations had to cut down due to the financial crisis.

Enjoying a high level of popularity as prime minister in his own country, Stoltenberg also received international praise when he called for "more democracy" and "more humanity" after extremist Anders Behring Breivik killed 77 people on July 22, 2011.

His mediating skills have led some to accuse him of being adverse to conflict.

According to Norwegian media, it was German Chancellor Angela Merkel who backed his candidacy, quickly followed by US President Barack Obama.

Many have high hopes for the new NATO leader. Stoltenberg is "calm, a good listener," a Brussels diplomat said.

Promoted
Listen to the latest songs, only on JioSaavn.com
"He does not share the messianic idea of his post with Rasmussen, who was over the top and could say the word 'freedom' a dozen times in his speeches."