Fred Fleitz has promoted the idea of a "clash of civilizations" between Islam and America. 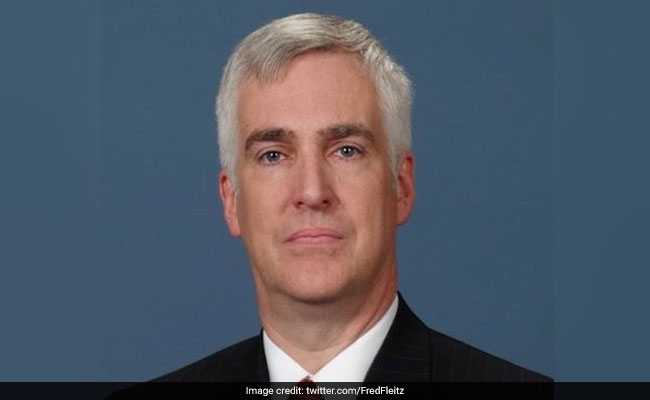 Fred Fleitz is a former chief of staff to Bolton during the George W. Bush administration.

New York, United States: The White House has named a new National Security Council chief of staff from a group that propagates the conspiracy theory that Islamists have infiltrated the U.S. government in a plot to take over America.

The appointment of Fred Fleitz to the National Security Council drew condemnation from civil rights advocacy groups this week for what one group, the Anti-Defamation League, described as "his senior leadership role with the Center for Security Policy, an Islamophobic, conspiracy-promoting organization."

"The White House continues to be the nation's central organizing body for white supremacists," another organization, Muslim Advocates, wrote in statement responding to Fleitz's appointment on Tuesday.

Spokespeople for the White House and the National Security Council did not respond to a request for comment on Fleitz's national security views. NSC spokesman Robert Palladino confirmed Fleitz's appointment as NSC chief of staff, deputy assistant to the president and executive secretary.

He is one among a flurry of new hires to the NSC from the ranks of President Donald Trump's recently appointed national security adviser John Bolton's longtime supporters and associates, and one of a rotating assembly of aides and advisers that civil rights groups have accused of bigotry and religious bias since Trump took office.

Fleitz is a former chief of staff to Bolton during the George W. Bush administration, and the author of "Obamabomb: A Dangerous and Growing National Security Fraud" and "The Coming North Korea Nuclear Nightmare: What Trump Must Do to Reverse Obama's 'Strategic Patience.'" He most recently served as the Center for Security Policy's senior vice president for policy.

While he has focused much of his recent energy in articles, social media posts and appearances in conservative media praising Trump and Bolton, and urging Trump to kill "the FAKE Iran deal," Fleitz has also promoted the myth of European "no-go zones" - places the CSP casts as being governed by Islamic law - as well as a widely debunked CSP survey that suggested a quarter of Muslims support violence against Americans. (During his campaign, Trump cited the same survey in calling for a ban on Muslims entering the United States.)

Fleitz has promoted the idea of a "clash of civilizations" between Islam and America, and co-authored a 2015 CSP report titled "A Plan For Victory Over The Global Jihad Movement" that claimed "the majority of Muslims and Islamic authorities . . . promote or at least support jihad and shariah supremacism."

"Unfortunately, no significant elements from within Islam thus far have presented themselves as likely allies in the death struggle we confront with our mutual enemies," the report said.

Fleitz and CSP have warned that major American Muslim organizations and mosques are secretly working to advance a jihadist agenda, and that such groups should not be trusted when they claim to "eschew violence," and should be "neutralized as political forces."

Fleitz has also contrasted the acute danger that he believes is posed by Muslims, compared to other religious groups.

"There are communities where British Muslims are deliberately not assimilating, are being taught to hate British society, and this is incubating radicalism. There's actually a parallel system of sharia law courts in the U.K. that operate," he said, claims that British officials say are falsehoods.

Fleitz warned of a similar danger from American Muslim communities, adding that only certain groups pose a danger by not assimilating.

"I'm not concerned about Amish or Jewish communities, but I will tell you that there are enclaves of Muslim communities in Michigan and Minnesota that concern me. We know that in Minnesota there's a rising rate of measles because the community has not assimilated into the rest of the community, and is not vaccinating their children. This is wrong. This is a big problem," he said, referring to an outbreak in Minneapolis after anti-vaccine activists convinced members of the Somali immigrant community that vaccines cause autism.

"The problem with these Muslim communities is that it is making them susceptible to this radical worldview that wants to destroy modern society, create a global caliphate, and impose sharia law on everyone on Earth," Fleitz said, according to Breitbart. "These other communities aren't trying to do that. They're peaceful religious communities."

Promoted
Listen to the latest songs, only on JioSaavn.com
He also warned of "radical clerics and radical mosques" that he said promote hate. And he said he believes that "political correctness" and use of the label "Islamophobic" has hindered the United States' ability "to go after radical Islam."