Woman Fights For A Third Face As Body Rejects Transplant

"We all know we are in uncharted waters," Carmen Blandin Tarleton said. "I would rather not have to go through a catastrophic failure.'' 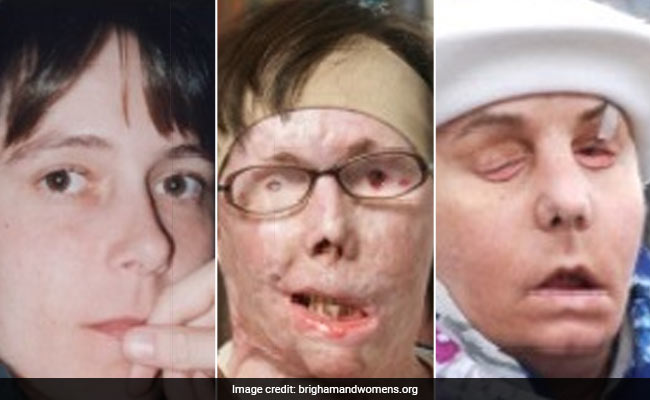 Carmen Blandin Tarleton does not want to go backward. She is fighting for a third face.

Tarleton, 12 years removed from her estranged husband's attack with a baseball bat and lye that burned most of her body, gained some of her life back after dozens of surgeries and a 2013 face transplant. She could play the piano. And a synthetic cornea helped her see out of one eye, allowing her to find her way around Manchester, New Hampshire.

For years, the contours of her new face have swollen in rejection episodes that doctors successfully treated. But now, at 51 years old, with blood vessels cut off and her facial tissue darkening and dying, Tarleton's immune system is fully rejecting her face.

That has forced her to confront two arduous possibilities: Receive another new face, or if her tissue rapidly fails, undergo reconstruction of her original face - and return to her disfigurement she left behind six years ago.

"We all know we are in uncharted waters," she told the Boston Globe. "I would rather not have to go through a catastrophic failure.''

Transplanted organs, like kidneys, hearts and lungs, typically have a limited life span in their new bodies. But doctors caution that the field of face transplants is still experimental, with no long-term studies or risk assessments to guide surgeons in a procedure only conducted about 40 times worldwide, The Associated Press reported.

"There are so many unknowns and so many new things we are discovering,'' Bohdan Pomahac, director of plastic surgery transplantation at Boston's Brigham and Women's Hospital and one of Tarleton's surgeons, told the Globe. "It's really not realistic to hope faces are going to last [the patient's] lifetime.''

Brian Gastman, a transplant surgeon at the Cleveland Clinic who led the first U.S. face transplant in 2008, told the Globe that more face transplants are failing in the years since the procedure was first performed. "We all believe every patient will likely need a re-transplant" at some point, he said.

No face transplant patients in the United States have lost their donated faces, the AP reported, though a man in France received a second transplant after his body rejected his first.

Tarleton has been outspoken about her attack and recovery that began hours after her estranged husband beat her with a baseball bat and doused her body with lye, which burned 80 percent of her body and left her legally blind.

She endured nearly 40 surgeries in three months, the Globe reported. Dozens of blood transfusions shocked her immune system, and when she received a donor's neck and face skin, nose, lips and a bundle of muscles, nerves and arteries, her new face bombarded her immune system.

Her physicians devised a dangerous solution: Shut down her immune system to give her new face a chance but leaving her in danger of infection.

It worked, and she has been able to move forward with her life. It now includes grandchildren.

But now she awaits a decision on whether to proceed with another transplant or go back to her disfigured face. Her physicians are encouraged by her recovered immune system. But other issues have arisen. Her synthetic cornea failed, leaving her almost entirely blind. She applied for a guide dog.

"These are not common things to go wrong, but when things go wrong you have to deal with it,'' she told the Globe. "l will get back to where I was. How, I don't know. I will get through this.''

Still, the transplant has relieved great pain for Tarleton, who suffered from neck scars that made it difficult to move her head. She tapered off her painkiller medication a year after the transplant. In the years since, she wrote a memoir and plucks a banjo.

She also spends time at her piano, where she belts out songs like The Eagles' classic "Desperado," uncertain of which face will greet her grandchildren in the future.