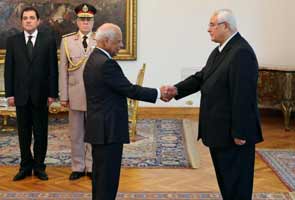 Cairo: Egypt's interim prime minister appealed for an end to the nation's divisions following the overthrow of Islamist President Mohamed Morsi and said tough measures might be needed to revive the economy.

Appearing relaxed and confident on state television, Hazem el-Beblawi, an international liberal economist, called for dialogue between political parties, adding that security had to be restored to Egypt's streets after weeks of mass protests.

"Egypt is more important to the world than we think and deserves more from us. The coming stage needs more harmony and reconciliation," Beblawi said in the lengthy interview.

Morsi's Muslim Brotherhood has branded the ousting of the president as a military coup and has said it will not enter into any talks with its opponents until he is restored to power, staging a round-the-clock vigil in Cairo to push their demand.

"There can be no dialogue when the gun barrels are pointing towards the anti-coup protesters," Brotherhood spokesman Gehad El-Haddad said, dismissing Beblawi's appeal.

The powerful armed forces, who have held Morsi in an undisclosed location since his July 3 downfall, have rejected calls for his reinstatement.

Instead, they have appointed a new, interim government, devoid of any Islamists parties. Sworn into office just four days ago, it is tasked with tackling the economy and preparing the way for swift elections.

Egypt's new president issued a decree on Saturday for experts to start work amending the constitution - a first step towards holding a new ballot in a country still struggling to come to terms with the toppling of Hosni Mubarak after the uprising in 2011.

A committee of 10 legal and constitutional experts will meet on Sunday and has a month to come up with proposals to give to a broader-based body, which will have a further 60 days to deliver a final draft to be voted on in a national referendum.

Beblawi said his cabinet was building "the base for what is to come", adding that he had instructed his ministers to explain clearly the many problems besieging the Arab world's most populous state. "You cannot ask a patient to take medicine, without explaining to him why he needs it for," he said.

Asked if austerity measures might be imposed, he said: "It could happen." He did not elaborate further.

Among the many accusations levelled against Morsi by his critics was mismanagement of the economy. The budget deficit has soared to about $3.2 billion a month and foreign reserves are more than 50 percent below their December 2010 levels.

"We are entering a stage similar to that of a war, to stop the bloodshed, restore economic activity and return security to the streets," Beblawi said.

More than 100 people have died in violence since Morsi's removal, most of them Muslim Brotherhood supporters killed in street clashes or shot in confrontations with security forces.

In a sign that the new Egyptian administration has been embraced by many of its neighbours, Jordan's King Abdullah paid an unannounced visit to Cairo on Saturday - the first by an Arab leader since Morsi's ousting.

Egyptian Foreign Minister Nabil Fahmy made clear the government planned to play an assertive role in regional affairs despite the unresolved domestic turmoil.

Signaling a return to cooler relations between Egypt and Iran after an attempt at rapprochement under Morsi, Egyptian security forces on Saturday raided the Cairo office of the Iranian Al Alam Arabic satellite channel.

Promoted
Listen to the latest songs, only on JioSaavn.com
The channel's director was detained and equipment seized, Al Alam said. A security source said the outlet lacked a licence.