Drones have been a vital part of the Pentagon's arsenal for years, but the competition for a Navy carrier-based version that can refuel jet fighters in the midair would mark a significant advancement in the technology - and become another sign how the military is increasingly integrating robots into the way it fights. 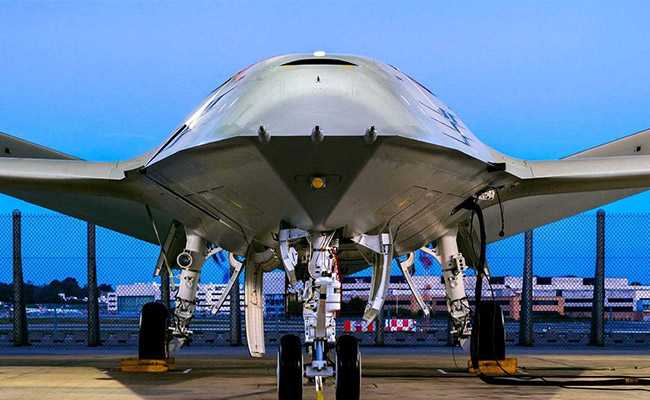 Boeing's MQ-25 drone is designed to provide the U.S. Navy with refueling capabilities

Boeing recently offered a first glimpse of its newest military aircraft, a large, stingray-shaped drone it hopes will win an intense Navy competition to build an uncrewed aircraft capable of landing on an aircraft carrier.

Drones have been a vital part of the Pentagon's arsenal for years, but the competition for a Navy carrier-based version that can refuel jet fighters in the midair would mark a significant advancement in the technology - and become another sign how the military is increasingly integrating robots into the way it fights.

In addition to Boeing, two of the Pentagon's top suppliers, General Atomics and Lockheed Martin, are also vying for a contract to build as many as 76 of the vehicles that would become operational in the mid 2020s. Bids are due Jan. 3, setting the stage for a high-stakes competition in 2018. Though the Navy has not yet released the value of the contract, an earlier incarnation of the effort - in which the drones would both serve as refueling aircraft and have attack capabilities - would have been worth $3 billion through 2022. As conceived now, the aircraft would not be configured to strike targets.

In recent years, the Pentagon has shown that drones are not just capable of flying from airstrips around the world, but from sea as well. In 2013, Northrop Grumman's X-47B became the first drone to take off and land from an aircraft carrier, the USS George H.W. Bush in a flight that one top Navy official said marked "an inflection point in history on how we will integrate manned and unmanned aircraft on carrier flight decks in the future."

Then, a year later, the X-47B flew in concert with F/A-18 fighter jets. It took its next step in 2015 when it was refueled in midair by a tanker jet.

If successful, the MQ-25 would become a key component for the Navy. With more capable defense systems, potential adversaries, particularly China, are pushing the Navy's aircraft carriers further and further away from shorelines - and out of striking distance of fighter jets.

The ability to refuel those jets in midair with a drone would allow them to strike deeper into enemy territory, even while the carriers stay safely off shore. Without that capability, defense analysts fear the U.S.'s long-held air dominance could be diminished and its fleet of aircraft carriers, perhaps one of the most significant ways the Pentagon projects force from wherever, whenever, could become obsolete.

"The Navy has a growing concern with threats to its aircrafts carriers," said Loren Thompson, a defense consultant, who works with many of the large contractors. "Carriers cost billions of dollars and have thousand of personnel on board, so if it can attack targets without having to get too close, that's a big warfighter advantage."

In addition to refueling fighter jets, including the F/A-18 Super Hornet and the F-35C, the drones could also be used on surveillance missions, staying aloft for long stretches, Thompson said.

Though it developed the X-47B, Northrop Grumman suddenly dropped out of the competition in October, stunning many in the industry that had thought it had a good chance to win. During a conference call with Wall Street analysts to discuss quarterly financial results, Wes Bush, Northrop's chairman and chief executive, said the program didn't make financial sense for the company, which is already developing a new stealth bomber for the Pentagon.

"When we're looking at one of these opportunities, let me be clear: Our objective is not just to win. Winning is great, it feels good on the day of an announcement," he said. "But if you can't really execute on it and deliver on it to your customer and your shareholders, then you've done the wrong thing."

For Boeing and Lockheed, which teamed up on the bomber contract but lost, the Navy competition represents a significant opportunity to build a new military airframe. That's especially important for Boeing, which has slowed down its F/A-18 production line, while Lockheed Martin is ramping up manufacturing of its F-35 Joint Strike Fighter.

"Boeing has been delivering carrier aircraft to the Navy for almost 90 years," Don "BD" Gaddis, a retired admiral of Boeing's Phantom Works technology organization, said in a statement. "Our expertise gives us confidence in our approach."

Promoted
Listen to the latest songs, only on JioSaavn.com
It faces tough competition, however. Lockheed Martin is the world's largest defense contractor, and General Atomics has a long history in developing remotely piloted aircraft, including the Predator and Gray Eagle.