Scott Morrison, the former finance minister, was sworn in as Prime Minister on Friday after winning Liberal Party leadership challenge. 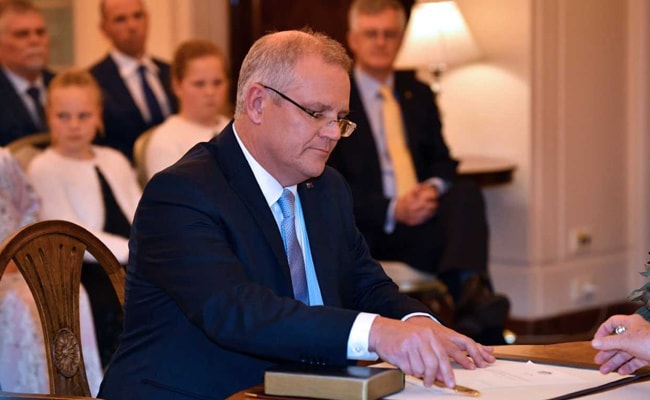 Morrison, the former treasurer (finance minister), was sworn in as prime minister on Friday after winning a Liberal Party leadership challenge against incumbent moderate Malcolm Turnbull.

The challenge had been instigated by Home Affairs Minister Peter Dutton, whom Morrison -- also to the right of the party -- defeated in a secret ballot. He sought to heal the wounds exposed by the infighting.

"This new Liberal-National team is a next-generation team," Morrison told reporters in Canberra of the governing coalition between the Liberals and the rural-based Nationals party.

"What we have done today in pulling this team together is provide for stability... it does begin the process of healing."

Dutton kept Home Affairs but his super-sized portfolio was split to separate immigration and national security, with migration issues to be handled by former assistant finance minister David Coleman.

The environment and energy portfolio, which was held by the man who is now Treasurer Josh Frydenberg, was also broken up in an acknowledgement of the tensions the two issues caused within the party.

Environment and energy policies were key bones of contention between Turnbull and the right-wingers, who wanted him to prioritise older electricity generation sources such as coal over renewables and emissions mitigation.

Bishop, a rare female voice in the Australian government, had put her hand up to be one of three candidates to replace Turnbull. But she received minimal support from colleagues, even as opinion polls pointed to her popularity among voters.

Her departure has raised questions about whether she fell victim to party politics and to a perceived glass ceiling for women in Canberra.

Renowned for her steely gaze dubbed the "death stare", Bishop's highlights as foreign minister include her strong condemnation of Russia's role in the shooting down of Malaysia Airlines MH17 in 2014.

Former deputy PM and Nationals leader Barnaby Joyce, who was forced to quit in February and move to the backbench over his affair with his younger former media adviser, returned in a drought advisory role.

But there was no room for ex-PM Tony Abbott -- a vocal critic of Turnbull after Turnbull ousted him as leader in 2015.

Morrison said he was open to Abbott, who had supported Dutton, being involved in government decisions in an advisory capacity.