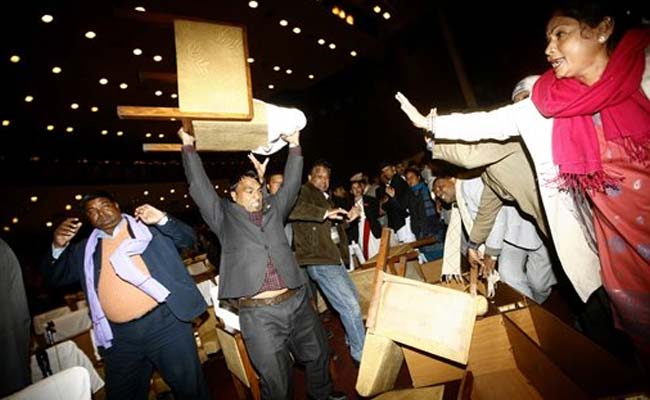 An unidentified Nepalese politician from the opposition party lifts a chair to throw, during the Constituent Assembly meeting, in Nepal on January 20, 2015. (Associated Press)

Kathmandu: Nepal stepped up security in the capital and put police on alert on Thursday, anticipating trouble both inside parliament and on the streets because of planned protests by the opposition against governing coalition plans to push through a draft of a new constitution.

Chief government administrator of Kathmandu, Ek Narayan Aryal said thousands of police in riot gear and armed with bamboo batons were guarding the area around the Constitution Assembly and areas of the capital Kathmandu.

Protests have been banned in the assembly hall area and police warned that violators would be arrested.
The opposition has vowed to block the governing coalition's plan to push through the new constitution, saying it should be done only with a consensus of all the parties.

On Tuesday, opposition politicians threw chairs and attacked the parliamentary speaker to stop him from proposing the formation of a questionnaire committee, which precedes voting on the constitutional draft.

But the ruling coalition still plans to push through a draft of the new constitution on Thursday.

"Since today is the deadline for the new constitution, we should, at least, take the procedure ahead by forming the committee," said Rajan Bhattarai of the Communist.

Party of Nepal Unified Marxist Leninist, which is part of the ruling coalition.

The ruling coalition makes up more than two-thirds of the 605-member assembly, enough to get the draft approved. However, the opposition has not allowed the assembly to meet by chanting slogans in the assembly hall.

The Himalayan nation has been attempting to draft a constitution since electing its first Constituent Assembly in 2008. The current assembly was chosen in 2013 but disagreements among the parties continue to hamper progress.

The delays have caused resentment from the public and business leaders.

Promoted
Listen to the latest songs, only on JioSaavn.com
"Disappointment is an understatement. How can the leaders repeatedly make the same mistakes over and over again?" said Saurabh Jyoti, of the Federation of Nepalese Chambers of Commerce and Industry.