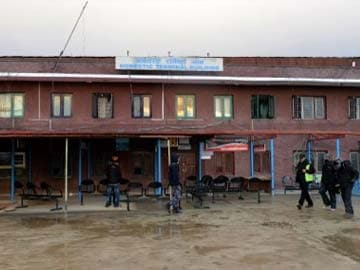 Nepalese residents stand near the domestic terminal building, after a domestic plane crashed in the north-west of the Kathmandu valley, in Kathmandu on February 16, 2014

Kathmandu: Nepalese police on Monday found the wreckage of a missing Nepal Airlines plane carrying 18 people in the country's mountainous west but there were no survivors, an aviation official said.

"The plane crashed into a hill, police have found its wreckage in a village, but no survivors," Bimlesh Lal Karna, chief air traffic controller at the country's largest airport in Kathmandu, told AFP.

The plane carrying 15 passengers including an infant and three crew lost contact with air traffic controllers shortly after taking off from the popular tourist town of Pokhara Sunday afternoon, airline officials and police said.

The aircraft from the state-run carrier was travelling to the town of Jumla, 353 kilometres (220 miles) west of Kathmandu, when air traffic controllers lost contact.

Heavy rain hampered Sunday's efforts to locate the plane with two helicopters forced to turn back because of bad weather.

One of the passengers is from Denmark, according to airline spokesman Ram Hari Sharma.

The rest of those on board - including Manab Sejuwal, a local politician from the ruling Nepali Congress party - are from Nepal.

The crash again raises concerns about the Himalayan nation's aviation sector, which has come under fire from international authorities after a series of fatal accidents.

Promoted
Listen to the latest songs, only on JioSaavn.com
The European Union in December banned all the country's airlines from flying to the EU.

Nepal, which counts tourism as a major contributor to its economy, has suffered a number of air crashes in recent years, which have usually been attributed to inexperienced pilots, poor management and inadequate maintenance.