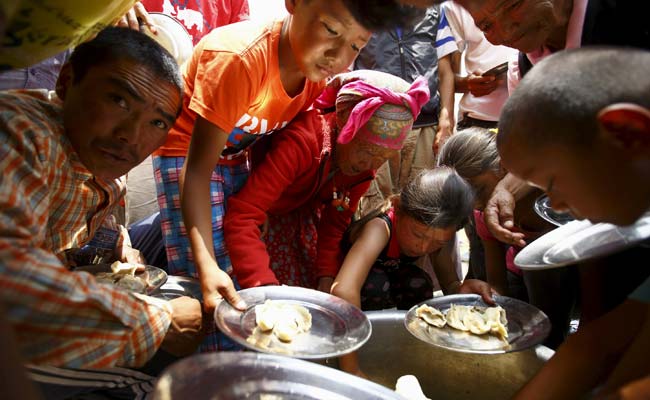 Earthquake victims from Langtang district gather to receive food at a Tibetan monastery, a month after the April 25 earthquake, in Kathmandu, Nepal May 28, 2015. (Reuters)

Kathmandu: Nepali soldiers and police have recovered the bodies of 53 trekkers and villagers buried in avalanches set off by an earthquake in April, and were digging through snow and rocks with shovels and hoes today for signs of more victims.

Search and rescue operations had been suspended in the village of Langtang, 60 km (40 miles) north of Kathmandu, last month as fresh avalanches buried some of the 128 bodies that had been recovered, putting rescue workers in danger.

Soldiers from the army's disaster response unit resumed the search after the risk from avalanches abated and recovered 53 bodies including three of foreign trekkers over the weekend, the military said in a statement.

"It is still confusing whether all these 53 bodies are new or also included those that were washed away by the avalanche after being recovered earlier," army spokesman Brigadier General Jagadish Chandra Pokharel told Reuters.

Uddhav Bhattarai, the most senior bureaucrat of Rasuwa district where Langtang is located, said scores of soldiers, joined by police and villagers were looking for more than a dozen trekkers and Nepalis missing since the April 25 earthquake.

Rasuwa, bordering Tibet, is one of the areas hardest hit by the earthquake and another on May 12 which together claimed 8,773 lives in Nepal's worst natural disaster on record.
© Thomson Reuters 2015