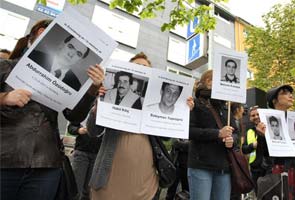 Berlin: German authorities arrested Monday a 93-year-old alleged former guard at the Nazi death camp Auschwitz on charges of complicity in the mass murder of prisoners.

Prosecutors in the southwestern state of Baden-Wuerttemberg said the man was believed to have worked at the camp between autumn 1941 and its closure in 1945.

Authorities declined to release the suspect's name but media reports and the Simon Wiesenthal Center said it was Hans Lipschis, who figures among the Center's most-wanted Nazis and is said to have served in the SS "Death's Head" battalion.

The man, who was detained at his home, "appeared before a judge and was taken into custody", the prosecutor's office in the state capital Stuttgart said in a statement.

"The indictment against him is currently being prepared."

Stuttgart prosecutors confirmed to AFP last month that they were working on a probe launched late last year against a suspect who had worked at Auschwitz.

Lipschis has been living in the Baden-Wuerttemberg town of Aalen and reportedly told the authorities that he worked as a cook, not a guard, in the camp in then occupied Poland.

However prosecutors said the evidence pointed to the fact that the suspect in question had broader responsibilities.

"He took on supervisory duties although he did not only work as a guard," a spokeswoman for the prosecutor's office told AFP.

"We will try to determine concretely when and what he did at Auschwitz."

She said the suspect was not believed to have killed prisoners himself but rather "that he abetted the actions of the perpetrators".

Despite his advanced age, the suspect underwent a medical examination and was determined fit to be taken into custody.

The Simon Wiesenthal Center, in its 2013 report, lists Lipschis as its fourth most-wanted Nazi, saying he served in the SS-Totenkopf Sturmbann (Death's Head Battalion) from 1941 until 1945 at Auschwitz, and "participated in the mass murder and persecution of innocent civilians, primarily Jews".

Lithuanian-born Lipschis was granted "ethnic German" status by the Nazis. He moved to the United States in 1956 but was deported to Germanyin 1983 for failing to reveal his SS past, Welt am Sonntag newspaper reported last month.

Promoted
Listen to the latest songs, only on JioSaavn.com
More than one million people, mostly European Jews, perished at Auschwitz-Birkenau, operated by Nazi Germany in occupied Poland from 1940 until it was liberated by the Soviet Red Army on January 27, 1945.