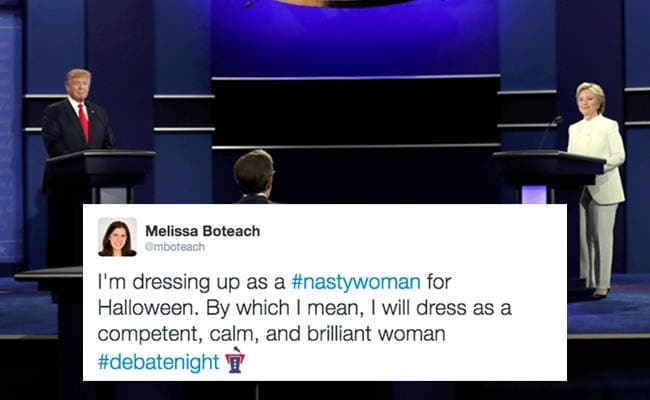 'Nasty woman' is now a trending topic on Twitter.

There were many fiery exchanges between Hillary Clinton and Donald Trump in the final US presidential debate on Thursday morning. One particular comment from the Republican candidate has left most of Twitter enraged.

Not long after insisting "nobody respects women more than me", Trump muttered "such a nasty woman" when Hillary Clinton was describing her plan to raise taxes on the wealthy.

Promoted
Listen to the latest songs, only on JioSaavn.com
"My Social Security payroll contribution will go up, as will Donald's - if he can't figure out how to get out of it," Hillary had quipped.

I'm dressing up as a #nastywoman for Halloween. By which I mean, I will dress as a competent, calm, and brilliant woman #debatenight

Blurt #nastywoman into a microphone and women are lining up like this for @HillaryClinton. We'll see you on election day Trump. pic.twitter.com/Q24eETHgDj

You know what a #NastyWoman is good at? Voting. #debatepic.twitter.com/T4DDbNC8cY

This #nastywoman has a ballot and will vote.

I was #ReluctantlyWithHer all this time but tonight DT let me know that HC was a nasty woman. We gotta stick together so... #NastyWoman