NGC 1858, located in the constellation Dorado, is about 160,000 light-years away and is home to several large stars that can be seen shining brilliantly at the heart of the image. 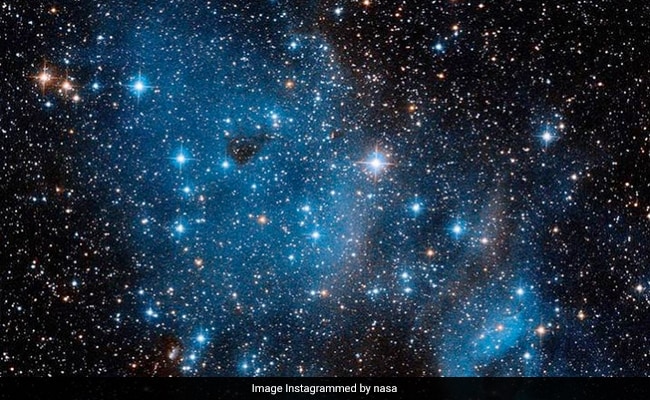 NASA astronomers believe that this star cluster is around 10 million years old.

American space agency NASA's Hubble Space Telescope recently captured a stunning image of a beautiful open star cluster called NGC 1858, located in an area full of star-forming regions. Taking to Instagram, the National Aeronautics and Space Administration shared the image which showed an electric sea of stars glimmering against a backdrop of pinpricks of light.

"An open star cluster northwest part of the Large Magellanic cloud, a satellite galaxy of our Milky Way, shows an abundance of star-forming regions. Open clusters are a type of star cluster with loose gravitational attraction between the stars, which causes the cluster to be more spread out and unusually shaped," the space agency wrote in the caption of the post.

NASA astronomers believe that this star cluster is around 10 million years old. They explained that in addition to its funky shape, NGC 1858 is an emission nebula - a cloud of interstellar gas that has undergone ionization due to UV radiation from surrounding stars.

As per the caption of the post, the nebula's gas creates its own light at visible wavelengths, which can be made out in this image as a faint cloud in the middle and bottom right of the picture.

"The cluster is estimated to be around 10 million years old, but contains stars at different phases of their evolution, making it a complex collection. The presence of an emission nebula suggests that star formation recently occurred here since the radiation required to ionize the gas of the nebula comes from stars that only live a short time," the space agency said.

NGC 1858, located in the constellation Dorado, is about 160,000 light-years away and is home to several large stars that can be seen shining brilliantly at the heart of the image. The cluster is surrounded by millions of stars and is situated in a busy region of the sky. The stars vary in colour and size. While some appear as dots, others appear large enough to capture the telescope's signature artefact of four spikes.