NASA to make water on Moon and oxygen on Mars 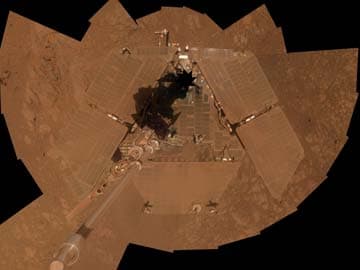 This NASA image obtained January 23, 2014 shows a mosaic of images recorded by NASA's Mars Exploration Rover Opportunity for this self-portrait about three weeks before completing a decade of work on Mars.

Washington: NASA is planning to launch robotic missions to make water on the Moon in 2018 and oxygen on Mars in 2020.

The Moon mission will be the US space agency's first attempt to demonstrate in-situ resource utilisation (ISRU) beyond Earth.

The purpose of ISRU, or "living off the land" is to harness and utilise space resources to create products and services which enable and significantly reduce the mass, cost, and risk of near-term and long-term space exploration.

"Every pound that you don't have to launch from the Earth of dumb mass - things like water and air and propellant - means that you can add a pound of intelligent mass - an experiment, a computer, something designed to accomplish some job or give us some capability," said lunar geologist Paul Spudis, with the Lunar and Planetary Institute in Houston.

"Doing ISRU gives you incredible leverage because you're changing the fraction of intelligent-to-dumb mass on your spacecraft in favour of the intelligent part," he said.

NASA plans to launch a mission called Resource Prospector that includes a rover with instruments to scout for telltale hydrogen, drill out samples, heat them and scan for water vapour and other volatiles on the moon.

Vapour also could be re-condensed to form a drop of water.

"A lot of the technologies have broader use than just lunar...it's just a convenient location to be testing the ISRU technology," said Jason Crusan, director of Advanced Exploration Systems at NASA headquarters in Washington DC.

A second ISRU experiment is due to be aboard NASA's next Mars rover, which is slated for launch in 2020.

The device, which is yet to be selected, would pull carbon dioxide from the planet's atmosphere, filter out dust and other particles and prepare the gas for chemical processing into oxygen.

Promoted
Listen to the latest songs, only on JioSaavn.com
The demonstration also could include actual oxygen production, the report said.