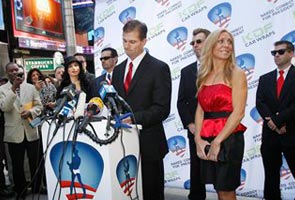 New York: New York's "Naked Cowboy" is looking for some new exposure as a presidential candidate.

Robert Burck is familiar to any Times Square tourist as the man standing in the heart of the "Crossroads of the World," playing a guitar and wearing only tighty-whiteys, boots and a cowboy hat.

But he wore a suit and tie Wednesday as he announced his intention to run for president in 2012 as a member of the conservative tea party movement.

He proclaimed he was running "in defence of individual liberty" and criticized President Barack Obama for the direction of the country.

"America is rapidly transforming into a government-run enterprise," the tourist attraction said, adding that "American politicians are selling out America and its most cherished institution, that being capitalism."

For the big announcement, the hat was off -- perhaps symbolically tossed into the ring. Burck said he was registered as a Republican in Ohio.

Among his policy goals, he listed closing borders, requiring drug tests for welfare recipients, abolishing unions for government workers, and cutting capital gains and income taxes. He also said he would work to reverse the recently passed health care law.

Is he serious? He says yes. But this isn't his first flirtation with public office. He announced a mayoral run in 2009 and later dropped out.

His news conference attracted a throng of media, as well as curious onlookers. When it came time for questions, he was asked about his underwear choices and whether he was being dishonest because he wasn't actually naked when performing.

Promoted
Listen to the latest songs, only on JioSaavn.com
He declined to say what impact his presidential aspirations would have on his performances.
Cari Teff, 34, visiting from Monroe, Wis., had seen the Naked Cowboy in all his glory once before.

"I couldn't believe it," she said Wednesday. "I didn't know who it was at first."