Drones had on Thursday spotted footprints "that appear to have been made by people inside the exclusion zone," despite the area's inaccessibility and a ban on entering it. 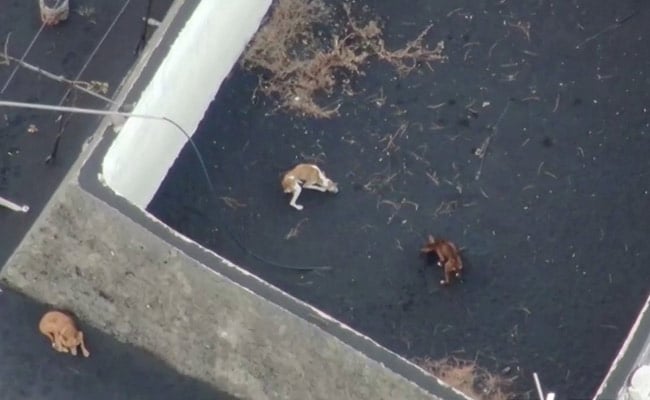 The four emaciated dogs were trapped in Todoque which has been swamped by lava since September 19.

For days, Spain was gripped by the drama of four hungry dogs trapped by an erupting volcano as daring plans were made to rescue them by drone.

Then suddenly they disappeared, with only a mysterious note left at the scene saying that the hounds were safe.

Footage of the dogs stranded inside two empty water tanks cut off by surrounding flows of red-hot lava on La Palma in the Canary Islands was first released by animal charity Leales.org, sparking a public outcry for their rescue.

But as plans took shape for a complex and unprecedented rescue by drone, everyone was caught short by their disappearance following an apparent overnight rescue operation.

The four emaciated dogs, all a local hunting breed known as Podenco Canario, were trapped in Todoque which has been swamped by lava since the Cumbre Vieja volcano erupted on September 19.

Although several pockets of land have remained untouched by lava, they were still inaccessible on foot or by helicopter, over fears the ash and hot gas would damage the rotors.

Despite a ban on transporting animals by drone, local officials approved a rescue operation by industrial drone operator Aerocameras involving a 50-kilogramme (110-pound) device fitted with a large semi-rigid net.

But when their drones flew over the site on Thursday, the dogs had vanished.

"After carrying out an exhaustive inspection of the exclusion zone where the dogs were supposed to be, our drones have found no trace of them," Aerocameras tweeted on Friday, confirming it was abandoning the mission.

Left at one of the enclaves was a large white sheet scrawled with the words: "Be strong, La Palma. The dogs are fine. The A-Team" in reference to a popular 1980s American TV series involving daring stunts.

So far, nobody knows who sprung the dogs, nor how they did it.

Aerocamera's drones had on Thursday spotted footprints "that appear to have been made by people inside the exclusion zone," despite the area's inaccessibility and a ban on entering it.

While some believe it was the work of animal rights activists, others -- including Leales.org -- believe the audacious rescue may have been staged by the dogs' owner or someone close to him.

But neither theory was confirmed by the police or local authorities, who did not say whether an investigation had been opened, and the case continued to make waves on social media on Friday.

Since the podencos' plight became public, Leales.org has received more than 15,000 euros ($17,500) in donations to help them.

It has been more than a month since Cumbre Vieja began erupting, forcing more than 6,000 people out of their homes as the lava burnt its way across huge swathes of land on the western side of La Palma.

Although no one has died or been hurt, the volcano has caused huge damage, with the molten rock covering over 2,200 acres (890 hectares) of land and destroying more than 2,100 properties.