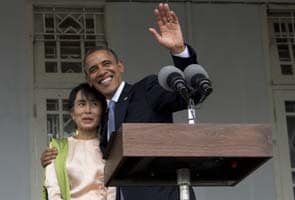 Yangon: In a historic trip to a long shunned land, President Barack Obama on Monday showered praise and promises of more US help to Myanmar if the Asian nation keeps building its new democracy. "Our goal is to sustain the momentum," he declared with pride as the first US president to visit Myanmar.

Tens of thousands of people lined the streets as Obama packed in diplomacy and soaked in his steamy surroundings. He shared words and an affectionate hug with the Aung San Suu Kyi, the democracy activist who endured years of house arrest to gain freedom and become a lawmaker.

"We are confident that this support will continue through the difficult years that lie ahead," she said of the help from America, Obama at her side. "The most difficult time in any transition is when you think that success is in sight. We have to be very careful that we're not lured by a mirage of success."

Obama told her that if the nation's leaders keep making true reforms, "we will do everything we can to ensure success."

The President was then on his way to give a televised speech at the University of Yangon, in which he would deliver the same message. Obama planned to tell his audience that the United States is ready to "extend the hand of friendship" now that Myanmar has unclenched its fist of iron rule.

"Instead of being repressed, the right of people to assemble together must now be fully respected," the president said in speech excerpts released by the White House. "Instead of being stifled, the veil of media censorship must continue to be lifted. As you take these steps, you can draw on your progress."

After meeting with President Thein Sein, who has orchestrated much of his country's transition to democracy, Obama said the reforms "in Myanmar" could unleash "the incredible potential of this beautiful country."

Obama's language alone was significant. The United States still officially refers to the country as Burma, after the former ruling junta summarily changed the name years ago to Myanmar. But US officials - and now Obama - have been less rigid about using the old name as relations change.

Obama met with Suu Kyi in the very home where she spent years under house arrest, a gated compound with a lawn ringed by roses.

On an overcast and steamy day, Obama touched down Monday morning. The city basically stopped for his visit, with many people waving American flags and taking photos with their smartphones.

Obama's visit to Myanmar was to last just six hours, but it carries significant symbolism, reflecting a remarkable turnaround in the countries' relationship.

Obama has rewarded Myanmar's rapid adoption of democratic reforms by lifting some economic penalties. The president has appointed a permanent ambassador to the country, and pledged greater investment if Myanmar continues to progress following a half-century of military rule.

Some human rights groups say Myanmar's government, which continues to hold hundreds of political prisoners and is struggling to contain ethnic violence, hasn't done enough to earn a personal visit from Obama. The president says his visit is not an endorsement of the government in Myanmar, but an acknowledgment that dramatic progress is underway.

Obama came down the steps of Air Force One next to Secretary of State Hillary Rodham Clinton, in recognition of their final foreign trip together. Clinton is leaving the job soon.

The President's stop came between visits to Thailand and Cambodia. His Asia tour also marks his formal return to the world stage after months mired in a bruising re-election campaign. For his first postelection trip, he tellingly settled on Asia, a region he has deemed the region as crucial to U.S. prosperity and security.

Aides say Asia will factor heavily in Obama's second term as the U.S. seeks to expand its influence in an attempt to counter China.

China's rise is also at play in Myanmar, which long has aligned itself with Beijing. But some in Myanmar fear that China is taking advantage of its wealth of natural resources, so the country is looking for other partners to help build its nascent economy.

Even as Obama turned his sights on Asia, widening violence in the Middle East competed for his attention.

Obama told reporters Sunday that Israel had the right to defend itself against missile attacks from Gaza. But he urged Israel not to launch a ground assault in Gaza, saying it would put Israeli soldiers, as well as Palestinian citizens, at greater risk and hamper an already vexing peace process.

As for Myanmar, as he seeks to assuage critics, Obama has trumpeted Suu Kyi's support of his outreach efforts, saying Sunday that she was "very encouraging" of his trip.

The White House says Obama will express his concern for the ongoing ethnic tensions in Myanmar's western Rakhine state, where more than 110,000 people - the vast majority of them Muslims known as Rohingya - have been displaced.

The UN has called the Rohingya - who are widely reviled by the Buddhist majority in Myanmar - among the world's most persecuted people.

The President will deliver his speech at a university that was the center of the country's struggle for independence against Britain and the launching point for many pro-democracy protests. The former military junta shut the dormitories in the 1990s fearing further unrest and forced most students to attend classes on satellite campuses on the outskirts of town.