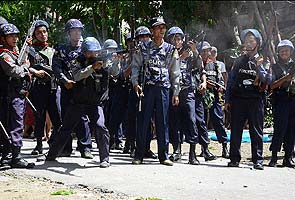 Okkan: Buddhist mobs hurling bricks overran a pair of mosques and set hundreds of homes ablaze in central Myanmar on Tuesday, injuring at least 10 people in the latest anti-Muslim violence to shake the Southeast Asian nation.

Terrified Muslim families who fled the assaults around Okkan, about 70 miles (110 kilometers) north of Yangon, could be seen hiding in forests along roads and crouching in paddy fields afterward. Some, in a state of shock, wept as their houses burned in the night and young men with buckets futilely tried to douse the flames.

The unrest was the first reported since late March, when similar Buddhist-led violence swept the town of Meikthila, further north, killing at least 43 people. It underscored the failure of reformist President Thein Sein's government to curb increasing attacks on minority Muslims in a nation struggling to emerge from half a century of oppressive military rule.

Residents said as many as 400 Buddhists armed with bricks and sticks rampaged through Okkan on Tuesday afternoon. They targeted Muslim shops and ransacked two mosques; about 20 riot police were later deployed to guard one of them, a single-story structure, which had its doors broken and windows smashed.

The worst-hit areas were three outlying villages that form part of the town. Each village contained at least 60 mostly Muslim homes; all were torched. Columns of smoke and leaping flames could be seen rising from burning homes in the villages as a team of police approached, pausing to take pictures with their cellphones.

Regional police chief Win Naing said at least 10 people were injured, most rescued from burning homes in the villages. There were no immediate reports of deaths.

Win Naing gave no details on who was behind the assault. Khin Maung Than, a Muslim in Okkan, said he recognized some of the attackers, but many faces were unfamiliar.

The mobs smashed his shop, stealing watches, breaking glass, and leaving overturned lamps and furniture scattered across the floor.

He said he climbed to the roof to escape and then took refuge with Buddhist neighbors who hid him. Returning to the shop that doubles as his home, he said: "I am speechless. I have never experienced such riots in my life."

The 60-year-old, who is married to a Buddhist woman, said he had heard of last month's violence in Meikhtila, but: "I didn't realize we'd face this because our town was very peaceful."

His wife, San Htay, said police in the town were quickly overwhelmed. They tried to disperse the crowds, she said, and several were injured in the mayhem.

"I can't explain how desperately sad I am now. My heart beats so fast because of fear," she told The Associated Press.

Stopping the spread of sectarian violence has proven a major challenge for Thein Sein's reformist government since it erupted in western Rakhine state last year. Human rights groups have recently accused his administration of failing to crack down on Buddhist extremists as violence has spread closer to the economic capital, Yangon, at times overwhelming riot police who have stood by as machete-wielding crowds attacked Muslims and their property.

Muslims account for about 4 percent of the nation's roughly 60 million people, and during the long era of authoritarian rule, military governments twice drove out hundreds of thousands of Rohingya, while smaller clashes occurred elsewhere. About one third of the nation's population consists of ethnic minority groups, and most have waged wars against the government for autonomy.

Last week, Human Rights Watch issued the most comprehensive and detailed account yet of the violence in Rakhine state. The report accused authorities - including Buddhist monks, local politicians and government officials, and state security forces - of fomenting an organized campaign of "ethnic cleansing" against a Muslim minority known as the Rohingya. Hundreds of people were killed there, and some 125,000 people, mostly Muslims, remain displaced with large swathes of the state effectively segregated along sectarian lines.

Promoted
Listen to the latest songs, only on JioSaavn.com
On Monday, a government-appointed commission investigating the Rakhine violence issued proposals to ease tensions there- including doubling the number of security forces in the volatile region and introducing family planning programs to stem population growth among minority Muslims.