The 200,000-tonne MV Ever Given got diagonally stuck in the narrow but crucial global trade artery in a sandstorm on March 23, triggering a mammoth six-day-long effort by Egyptian personnel and international salvage specialists to dislodge it. 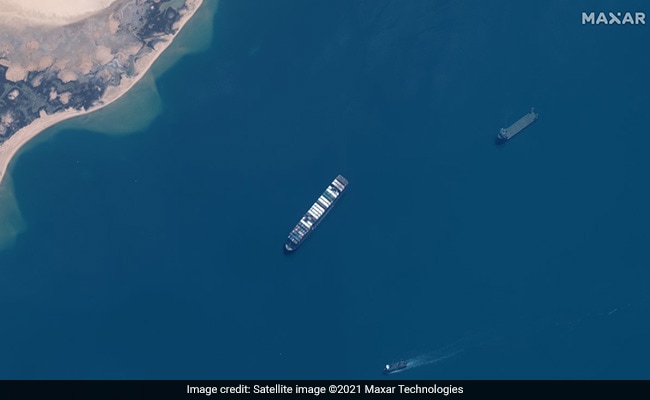 The Ever Given got diagonally stuck in Suez Canal. Click here for a high-resolution image.

The megaship which blocked Egypt's Suez Canal and crippled world trade for nearly a week has been "seized" on court orders until the vessel's owners pay $900 million, canal authorities said Tuesday.

The 200,000-tonne MV Ever Given got diagonally stuck in the narrow but crucial global trade artery in a sandstorm on March 23, triggering a mammoth six-day-long effort by Egyptian personnel and international salvage specialists to dislodge it.

Maritime data company Lloyd's List said the blockage by the vessel, longer than four football fields, held up an estimated $9.6 billion-worth of cargo between Asia and Europe each day it was stuck. 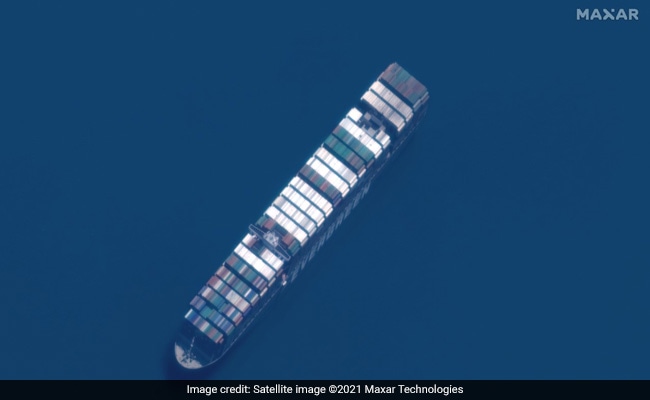 Close-up view of Ever Given ship and Great Bitter Lake. Click here for a high-resolution image.

Egypt also lost between $12 and $15 million in revenues for each day the waterway was closed, according to the canal authority.

The MV "Ever Given was seized due to its failure to pay $900 million" compensation, Suez Canal Authority chief Osama Rabie was quoted as saying by Al-Ahram, a state-run newspaper.

Rabie did not explicitly cite the Japanese owners Shoei Kisen Kaisha, but a different source at the SCA told AFP Tuesday that negotiations over damages between that company, insurance firms and the canal authority were ongoing.

The Japanese-owned, Taiwanese-operated and Panama-flagged ship was moved to unobstructive anchorage in the canal's Great Bitter Lake after it was freed on March 29, and tailbacks totalling 420 vessels at the northern and southern entrances to the canal were cleared in early April.

The compensation figure was calculated based on "the losses incurred by the grounded vessel as well as the flotation and maintenance costs" Rabie said, citing a ruling handed down by the Ismailia Economic Court in Egypt.

The grounding of the ship and the intensive salvage efforts are also reported to have resulted in significant damage to the canal.

In its court filing, the SCA referred to Articles 59 and 60 of Egypt's maritime trade law which stipulates that the ship would remain seized until the amount is paid in full, Al-Ahram reported.

But analysts have warned that apportioning legal responsibility for losses incurred by the numerous parties is likely to play out in protracted and complex international litigation.

Egypt's President Abdel Fattah al-Sisi has ruled out any widening of the southern stretch of the canal where the boat became diagonally stuck.

Sisi oversaw an expansion of a northern section, which included widening an existing stretch and introducing a 35-kilometre (21-mile) parallel waterway, to much fanfare in 2014-15.

But that was achieved at a cost of over $8 billion, without significantly increasing revenues from the canal.

Egyptian authorities have presented the dislodging of the ship as a vindication of the country's engineering and salvage capabilities, but observers point also to the crucial role played by international salvage experts.