Muslims Pray to Turn Turkey's Greatest Monument Back Into a Mosque 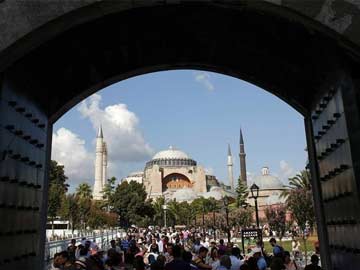 Local and foreign visitors, with the Byzantine-era monument of Hagia Sophia in the background, stroll at Sultanahmet square in Istanbul on August 23, 2013

Istanbul: It has served as the exalted seat of two faiths since its vast dome and lustrous gold mosaics first levitated above Istanbul in the 6th Century: Christendom's greatest cathedral for 900 years and one of Islam's greatest mosques for another 500.

Today, the Hagia Sophia, or Ayasofya in Turkish, is officially a museum: Turkey's most-visited monument, whose formally neutral status symbolises the secular nature of the modern Turkish state.

But tens of thousands of Muslim worshippers gathering there on Saturday hope it will again be a mosque, a dream they believe Prime Minister Tayyip Erdogan can fulfil.

There are even rumours - denied by the government - that Erdogan, a religious conservative who is seeking the presidency at an election in August, could lead prayers there one day soon.

"This is a serious push to break Ayasofya's chains," said Salih Turan, head of the Anatolia Youth Association, which has collected 15 million signatures to petition for it to be turned back into a mosque.

"Ayasofya is a symbol for the Islamic world and the symbol of Istanbul's conquest. Without it, the conquest is incomplete, we have failed to honour Sultan Mehmet's trust," he said, citing a 15th Century deed signed by the conquering Caliph and decrying as sin other uses of Hagia Sophia.

Built in 537 by Byzantine Emperor Justinian whose rule stretched from Spain to the Middle East, Hagia Sophia - meaning "Divine Wisdom" in Greek - was unrivalled in the Christian world until Ottoman Sultan Mehmet II conquered the city in 1453 and turned it into a mosque. Modern Turkey's founder Mustafa Kemal Ataturk decreed it a museum in 1934.

Now, renewed interest in praying at Hagia Sophia taps into a burgeoning sense of Islamic identity that Erdogan has encouraged during a decade as Turkey's dominant politician.

For most of the 20th Century, Western-oriented Turks scorned the imperial past. But Erdogan has promoted celebration of the Turkish conquest that turned Constantinople into Istanbul.

"Conquest is the removal of shackles on doors and in hearts," he said on Thursday to mark the 561st anniversary of the Byzantine defeat. "Civilisation comes with conquest."

A 2012 film depicting the Muslim takeover of the Byzantine capital, "Conquest 1453", attracted an audience of millions. So has the museum's "Panorama 1453" exhibition, which recreates the event in vivid detail.

Ibrahim Kalin, a senior Erdogan adviser, said there were no plans to alter the monument's current status.

"Speculation on changing it into a church or a mosque remains speculation. Hagia Sophia has been open to all visitors from Turkey and around the world and will remain so," he said.

But many pious Turks believe turning Hagia Sophia into a museum denigrated the memory of Sultan Mehmet, who strode into the ransacked cathedral to pray at its altar.

Calls for Hagia Sophia to be restored as a mosque have circulated before but were largely marginal until two years ago, when thousands of worshippers prayed at the monunment. Since then, Turkey's chief mufti has recruited Istanbul's most gifted muezzins to read the call to prayer from a sanctuary on its grounds, transmited through speakers on its brick-clad minaret.

The Koranic verses from Hagia Sophia create a soaring call and response with those read from across manicured gardens from the Sultan Ahmed Mosque.

In what was widely taken as a hint, Deputy Prime Minister Bulent Arinc stood outside Hagia Sophia in November and said he "prayed to God it would soon be smiling again," then cited a law forbidding houses of worship to be used for other purposes.

A pledge to make Hagia Sophia a mosque may draw some disaffected nationalist and religious voters back to Erdogan in the presidential vote after a year of anti-government protests and a corruption scandal, said Sahin Alpay, a professor of political science at Bahcesehir University and a columnist for the Zaman daily. But he argued it would not be worth the price.

"It would strengthen the mutual suspicion and polarisation between the West and the Muslim world," Alpay said. "All hell breaking loose is a high price to pay."

The U.S. Commission on International Religious Freedom, a bi-partisan advisory panel set up by Congress, said in a statement last week that such a move would threaten Turkey's international standing and recall its mistreatment of Christians over the last century.

"Whether driven by political considerations tied to Turkey's forthcoming elections, or for any other reason, opening Hagia Sophia as a mosque would clearly be a divisive and provocative move," it said, calling on Erdogan to affirm its current status.

"If its status is to change and it will be opened anew as a place of worship, then it cannot be forgotten that it was built to be a church, and that requires it be opened as a church again," Bartholomew told Agos newspaper on Thursday.

Bartholomew's seat remains in Istanbul, a vestige of the Byzantine Empire, even as his flock in Turkey has dwindled to less than 3,000 among a population of 75 million Muslims. Decades of violence and economic and political pressure forced most Christians to leave after the Republic was founded in 1923.

Turkish scholars and others have gathered just 1,000 or so signatures to petition against a change in Hagia Sophia's status.

Hagia Sophia attracted 3.3 million visitors in 2012 and is the crown jewel among Istanbul sites on Unesco's World Heritage List. The U.N. cultural agency has sought clarification from the government on Hagia Sophia's status and would consider whether a change undermines its value, said spokeswoman Petya Totcharova.

Archaeologists have long complained that relics of the Byzantine era get short shrift, pointing to a lack of a museum dedicated to the empire in the capital from where it ruled over the eastern Mediterranean for 1,200 years.

They say a building boom is bulldozing the pre-Islamic history of a city that was already 1,000 years old when Constantine I gave it his name and proclaimed it capital of the Roman Empire in 330 AD.

Reverting Hagia Sophia to a mosque "would demonstrate ... we are privileging and emphasising one historical layer of the monument and not its various layers," said Alessandra Ricci, a historian of the Byzantine period at Koc University in Istanbul.

"It is like sitting in front of a loom and weaving a carpet. If you turn it into a mosque, you lose the pattern. It's not the whole story," she said.

The seemingly weightless dome of Hagia Sophia still serves as the blueprint for Turkish mosques, as it did throughout the Ottoman centuries, said Edhem Eldem, history professor at Bogazici University.

Many Orthodox Christians were never reconciled to the loss of their cathedral. But its transformation into a museum "eased the pain, it removed a thorn," said Mihail Vasiliadis, editor of Istanbul's Greek newspaper Apoyevmatini.

"It may be an imperfect fix, but without it, people will no longer come to Istanbul to see where civilisations meet."

In 2010, Greek Americans aborted plans to pray at Hagia Sophia after Turkish authorities threatened to block their entry into the country.

In a possible omen for Hagia Sophia, two other churches that share its name and served as museums have re-opened as mosques.

In the Black Sea town of Trabzon, the 13th Century Hagia Sophia's celestial frescoes were obscured with blinds to avoid offending Muslims when the space became a mosque last year.

In the walled city of Iznik, or ancient Nicaea where Christianity's central Nicene Creed was adopted, authorities reverted a museum called Hagia Sophia to a mosque in 2011.

Like its Istanbul namesake, it was built in the 6th Century under Justinian, converted to a mosque under the Ottomans and became a museum in the 20th Century.

Promoted
Listen to the latest songs, only on JioSaavn.com
Today, Iznik is a dusty farm town where tractors rumble past a poorly kept 2,000-year-old Roman amphitheatre and goats feed among the pillars of an all-but-vanished 8th Century church burned down during Turkey's war with Greece in 1922.

Since the conversion, business has taken a hit as Christian pilgrims skip Iznik, a hotel owner said on condition his name was not used. "We are not reconciled with our past, and so we try to eliminate the traces," he said. "That's when we lose."
© Thomson Reuters 2014