The problem is what the climbers leave behind - tons of garbage and human waste that have earned Mount Everest the distinction as the "world's highest garbage dump." 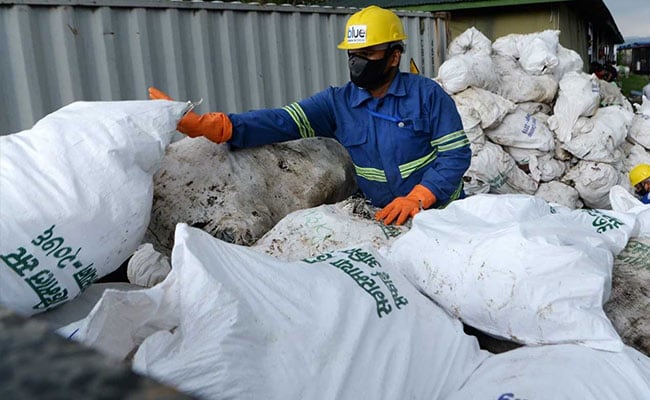 The trash buildup is just another in an ugly suite of problems facing Mount Everest in recent months.

The world's most famous peak is showing its wear and tear. Since it was first successfully topped in 1953, Mount Everest has become a sought-after destination for international daredevil climbers. Each spring, hundreds of people flock to the slopes of the nearly 30,000-foot mountain.

The problem is what they leave behind - tons of garbage and human waste that have earned the natural wonder the distinction as the "world's highest garbage dump."

The issue was underscored on Wednesday, when the government of Nepal announced that 24,200 pounds of garbage were pulled off the mountain during a 45-day cleanup expedition, according to the Times of India. Bigyan Dev Pandey, a spokesman for the Nepal Army, told the paper the tens of thousands of pounds of trash included "empty oxygen cylinders, plastic bottles, cans, batteries, food wrappings, faecal matter and kitchen waste."

Four human bodies were also recovered as part of the expedition, according to the Associated Press.

The trash buildup is just another in an ugly suite of problems facing the site in recent months.

This year has been Everest's deadliest climbing season on record since 2015, with 11 climbers killed on the mountain in 2019, NBC News reported. Recent photos showing a logjam of dozens of climbers waiting to mount the final stretch to the peak has sparked debate about whether the Nepalese government should restrict the number of climbing permits issued each year, or at least monitor whether those glory-seekers are experienced enough to take on Everest.

The growing issues on Everest have put the government in a tough spot - balancing environmental and safety concerns with the season's economic upside. According to Time, Everest climbers brings $300 million to Nepal annually.

"That's a huge amount of money for a relatively poor country like Nepal," Col. Ranveer Singh Jamwal, an Indian Army officer and veteran Everest climber, told CBS News last week. "It's not in their economic interest to limit the permits, nor should it be their responsibility to scan the health of climbers."

The government has yet to say whether they plan on restricting permits. According to CBS News, this year has not only seen a spike in climber deaths, but has set the record for the number of issued permits at 381.

There are no skill or fitness requirements. All Nepal requires from Everest climbers is an $11,000 permit fee, CBS News reported. Equipment and other expenses bring the total cost of most ascents to around $45,000 per climber.

Everest's spiking popularity has not only increased foot traffic on the mountain, but also negatively affected the environment. As John All, an environmental sciences professor at Western Washington University, told the Associated Press after a recent trip to Everest, the human impact combined with climate change has created a noticeable change.

"Overall, the past 10 years have seen a lot of changes in the mountains, and they all have been for the negative environmentally in terms of long term survivability of the glaciers," All told the AP this week.

Specifically, All and his team noted the dark coloration of the snow around Everest - a result of pollution.

"What that means is there are little pieces of pollution that the snow is forming around, so the snow is actually trapping the pollution and pulling it down," the professor explained. 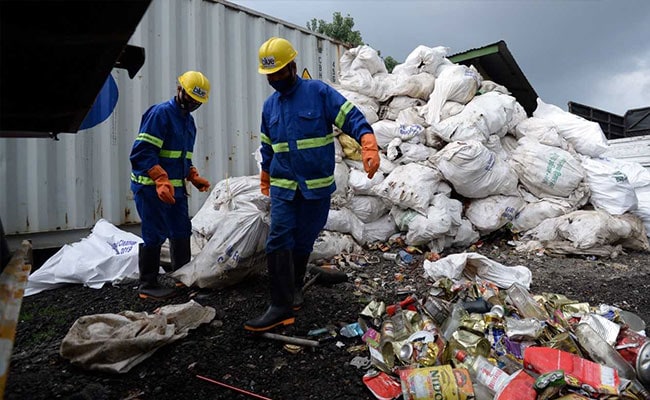 On April 14, the Nepal government sent a 12-person cleanup crew up the slopes to pull off garbage, the first time such a campaign has been undertaken.

Nepal has made past efforts to clean up the mountain. In 2014, a regulation was passed requiring every climber to take at least 17 pounds of trash off the mountain, the average amount left behind by each climber, USA Today reported.

On April 14, the government sent a 12-person cleanup crew up the slopes to pull off garbage, the first time such a campaign has been undertaken.

"Our goal is to extract as much waste as possible from Everest so as to restore glory to the mountain. Everest is not just the crown of the world, but our pride," Dandu Raj Ghimire, the director general of Nepal's department of tourism, said at a news conference after the mission launched, the Kathmandu Post reported in April.

Ghimire estimated the total project would cost 23 million Nepalese rupees, or around $207,000.

According to the AP, most of the recent haul was lifted at camps 2 and 3 on the trail to the mountaintop. Biodegradable material was dumped at a market near the gateway to Everest, the Times of India reported. Additional waste was flown by army helicopter to Kathmandu.

Two of the four bodies discovered by the cleanup team have been identified as the remains of Russian and Nepali climbers, according to the Times. Thanks to climate change, long-frozen human remains have begun emerging around Everest in increasing numbers.

Government officials have pledged to keep trying to clean up the peak.

"We will continue this cleanliness drive next year," Pandey told the Times.

(Except for the headline, this story has not been edited by NDTV staff and is published from a syndicated feed.)
Comments
Mount EverestGarbage on Mount EverestNepal