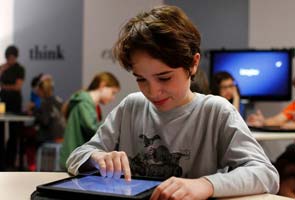 New York: As students returned to class this week, some were carrying brand-new Apple iPads in their backpacks, given not by their parents but by their schools.

A growing number of schools across the nation are embracing the iPad as the latest tool to teach Kafka in multimedia, history through "Jeopardy"-like games and math with step-by-step animation of complex problems.

As part of a pilot program, Roslyn High School on Long Island handed out 47 iPads on Dec. 20 to the students and teachers in two humanities classes. The school district hopes to provide iPads eventually to all 1,100 of its students.

The iPads cost $750 apiece, and they are to be used in class and at home during the school year to replace textbooks; allow students to correspond with teachers, file papers and homework assignments; and preserve a record of student work in digital portfolios.

"It allows us to extend the classroom beyond these four walls," said Larry Reiff, an English teacher at Roslyn who now posts all his course materials online.

More practically, he said, it also takes away students' excuses for not doing their work.

"It moves beyond the traditional scope of homework: go home, read, write," he said, referring to its video and multimedia elements. "I'm expecting a higher rate of homework completion."

Technological fads have come and gone in schools, and other experiments meant to rev up the educational experience for children raised on video games and YouTube have had mixed results. Educators, for instance, are still divided over whether initiatives to give every student a laptop have made a difference academically.

At a time when school districts are trying to get their budgets approved so they do not have to lay off teachers or cut programs, spending money on tablet computers may seem like an extravagance.

And some parents and scholars have raised concerns that schools are rushing to invest in them before their educational value has been proved by research.

"There is very little evidence that kids learn more, faster or better by using these machines," said Larry Cuban, a professor emeritus of education at Stanford University, who believes that the money would be better spent to recruit, train and retain teachers. "iPads are marvelous tools to engage kids, but then the novelty wears off, and you get into hard-core issues of teaching and learning."

But school leaders say the iPad is not just a cool new toy but rather a powerful and versatile tool with a multitude of applications, including thousands with educational uses.

"If there isn't an app that does something I need, there will be sooner or later," said Mr. Reiff, who said he now used an application that includes all of Shakespeare's plays.

Educators also laud the iPad's physical attributes, including its large touch screen (about 9.7 inches) and flat design, which allows students to maintain eye contact with their teachers. And students like its light weight, which offers a relief from the heavy books that weigh down their backpacks.

Roslyn administrators also said their adoption of the iPad, for which the district paid $56,250 for the initial 75 (32-gigabyte, with case and stylus), is advancing its effort to go paperless and cut spending. Some of the tablets are being used for special education students.

In Millburn, N.J., students at the South Mountain Elementary School have used two iPads purchased by the parent-teacher organization to play math games, study world maps and read "Winnie the Pooh." Scott Wolfe, the principal, said he hoped to secure 20 more iPads next school year to run apps that, for instance, simulate a piano keyboard on a screen or display constellations based on a viewer's location.

"I think this could very well be the biggest thing to hit school technology since the overhead projector," Mr. Wolfe said.

The New York City public schools have ordered more than 2,000 iPads, at $1.3 million; 300 went to Kingsbridge International High School in the Bronx, or enough for all 23 teachers and half the students to use at the same time.

More than 200 Chicago public schools applied for 23 district-financed iPad grants totaling $450,000; the winners each received 32 iPads, on average -- for a total of 745 -- as well as iTunes credit to purchase applications. The district is now applying for a $3 million state grant to provide iPads to low-performing schools next year.

Even kindergartners are getting their hands on iPads. Pinnacle Peak School in Scottsdale, Ariz., converted an empty classroom into a lab with 36 iPads -- named the "iMaginarium" -- that has become the centerpiece of the school because, as the principal put it, "of all the devices out there, the iPad has the most star power with kids."

But technology advocates like Elliot Soloway, an engineering professor at the University of Michigan at Ann Arbor, and Cathie Norris, a technology professor at the University of North Texas, question whether school officials have become so enamored with iPads that they have overlooked less costly options, like smartphones that offer similar benefits at a fraction of the iPad's base cost of about $500.

Indeed, many of the districts are paying for their iPads through federal and other grants, including money from the federal Race to the Top competitive grant program, which Durham, N.C., administrators are using to provide an iPad to every teacher and student at two low-performing schools.

"You can do everything that the iPad can with existing off-the-shelf technology and hardware for probably $300 to $400 less per device," Professor Soloway said.

Apple reported that it had sold more than 7.5 million iPads since April, but did not say how many went to schools.

Apple has been developing a school market for the iPad by working with textbook publishers on instructional programs and sponsoring iPad workshops for administrators and teachers. It does not, however, appear to have marketed the tablet as aggressively to schools as it did with its early desktop computers, some of which were heavily discounted for schools and helped establish a generation of Apple users. School officials say that Apple has been offering only a standard educational discount of about 10 percent on the iPad.

The company's app store shows that 5,400 educational applications are available specifically for the iPad, of which nearly 1,000 can be downloaded free.

Houghton Mifflin Harcourt, which developed the iPad algebra program in California, said it planned to compare the test scores of students using a textbook in digital and traditional book formats. The iPad version offers video of the author solving equations, and individualized assessments and practice problems.

In Virginia, Pearson, an educational publisher, added iPad-specific features to existing American and world history programs, including an application for "Jeopardy"-like games and functions that enable students to take on-screen notes in the margins, bookmark pages and zoom in for close-ups. Pearson will develop iPad versions for all of its new instructional programs for students in kindergarten through 12th grade, and begin offering iPad versions for 30 top-selling math, reading, literature, social studies and science programs in April.

Many school officials say they have been waiting for a technology like the iPad.

"It has brought individual technology into the classroom without changing the classroom atmosphere," said Alex Curtis, headmaster of the private Morristown-Beard School in New Jersey, which bought 60 iPads this school year for $36,000 and is considering providing iPads to all students next fall.

Dr. Curtis recently used a $1.99 application, ColorSplash, which removes or adds color to pictures, to demonstrate the importance of color in a Caravaggio painting in his seminar on Baroque art. "Traditionally, so much of art history is slides on a screen," he said. "When they were able to manipulate the image themselves, it came alive."

Daniel Brenner, the Roslyn superintendent, said the iPads would also save money in the long run by reducing printing and textbook costs; the estimated savings in the two iPad classes alone are $7,200 a year.

The district has begun replacing math textbooks with digital versions and expects to be able to download about 60 percent of the high school's literature reading list from iBooks free.

"It's not about a cool application," Dr. Brenner said. "We are talking about changing the way we do business in the classroom."