"Miracle" That All Passengers Safe After Plane Skids Into Florida River 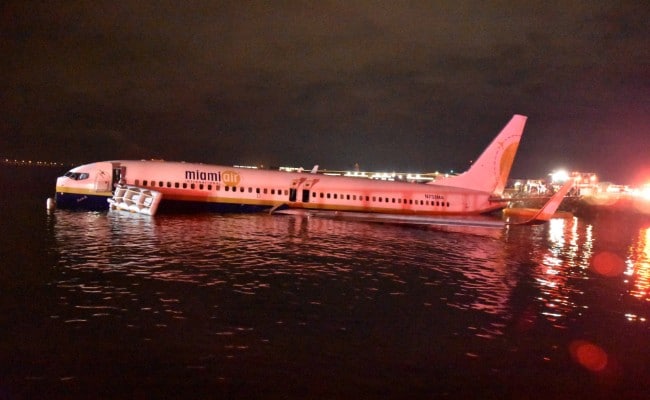 Dozens of shocked passengers were evacuated to safety from the wings of a stricken Boeing 737 on Saturday in Florida after the jet made a rough landing in a lightning storm and skidded off the runway into a river.

The plane carrying 143 people including crew from Guantanamo Bay in Cuba slammed into shallow water next to a naval air station in Jacksonville after a hard landing that saw the plane bounce and swerve down the runway, passengers said.

No fatalities or critical injuries were reported.

"As we went down... the plane bounced and screeched and bounced more and lifted to the right and then it lifted to the left," Cheryl Bormann, a defense attorney who was on board the flight, told CNN.

"And then it sort of swerved and then it came to a complete crash stop."

Some oxygen masks deployed and overhead lockers flew open during the landing, she added.

Twenty-one adults were taken to local hospitals, but none were critically injured, the Jacksonville sheriff's office said on Twitter. Others were treated for minor injuries at the scene.

"We could be talking about a different story this evening, so I think there's a lot to say about, you know, the professionalism of the folks that helped the passengers off the airplane... it very well could be worse," he said.

All 136 passengers and seven aircrew on board had been accounted for, NAS Jacksonville said in a statement.

However, there were fears for a number of pet animals traveling in the plane's luggage compartment.

The pets had "not been retrieved yet due to safety issues with the aircraft," NAS Jacksonville said in an update on Facebook.

The National Transportation Safety Board said a 16-member team had arrived on site to investigate the incident, and would brief the media later in the day.

Boeing said it was aware of the incident was and providing technical assistance to the agency as it conducts its probe.

Passengers in life vests were instructed to clamber onto the wings of the jet before being transported to shore aboard inflatable life rafts, Bormann said.

"We couldn't tell where we were, a river or an ocean. There was rain coming down. There was lightning and thunder. We stood on that wing for a significant period of time," she told CNN.

Navy security and emergency response personnel including some 90 firefighters were on the scene.

Jacksonville Mayor Lenny Curry tweeted that the White House had called to offer assistance as the situation was developing.

"All alive and accounted for. Our Fire and Rescue teams are family to all," said Curry.

Teams were working to control jet fuel spilling into the St Johns River, he added.

The "Rotator" flight from the US military base in Cuba carries passengers including military personnel and family members.

The plane involved was a Boeing 737-800, in operation for 18 years, according to the FlightRadar24 website.

US aerospace giant Boeing is under scrutiny following two crashes that killed a total of 346 passengers and crew and grounded its newer 737 MAX planes worldwide.

Both a Lion Air crash in Indonesia in October and March's Ethiopian Airlines crash outside Addis Ababa occurred shortly after takeoff.