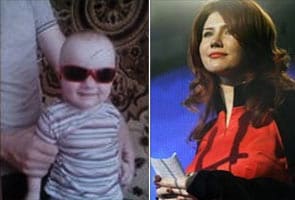 Krasnooktyabrsk: A year ago, a family living in this village in the middle of a marsh in the south of Russia revealed what they called a miracle: On the skin of their newborn boy, entire verses from the Koran were appearing, lingering for a few days, and then vanishing.

One day, the looping swirl of letters ran down a chubby leg.

Another, the name of God shone behind an ear.

Quickly, images of Ali, now 2 years old, spread through the North Caucasus. To many, he became a symbol of hope for peace in a mostly Muslim region that has been at war, on and off, for two decades. Ali showed up on cellphone screens and Internet sites, and pilgrims flocked to this place, whose name in Russian means Red October Village.

And then, seemingly as quickly as it had started, Ali was hidden from the world. For a few weeks now, the boy's parents and grandparents have refused to allow outsiders to see him.

The reason, bizarrely enough, is Anna Chapman. The onetime New York real estate consultant who was arrested as a Russian secret agent last summer and returned to Moscow in a spy swap has since bounced between modeling jobs, posed provocatively for a Russian magazine and joined a pro-Kremlin youth group. She now hosts a television show about paranormal phenomena in the former Soviet Union, called "Secrets of the World."

In the opening sequences, she gives the camera a smoldering glance and says "I will reveal all secrets." The tease, though, is not followed by discussions of spycraft or disrobing.

And her profile of little Ali was deeply offensive to his family, who live on a dirt road amid cow pastures in this poor and unstable part of Russia.

In an interview in the driveway to Ali's home, as chickens scurried about, the grandmother, Zulikhata Yakubova, said, "Our family was chosen by God," rebutting suggestions raised on Ms. Chapman's show that the mysterious writing was a ruse. "We vowed never to show Ali to a journalist again."

As for Ms. Yakubova herself, "I cannot even read or write," she protested. "I just pray five times a day."

Ms. Chapman's skeptical portrayal came as a shock because in Dagestan, the republic in the North Caucasus where blue-eyed Ali was born into troubled times and a growing Islamic insurgency, local journalists and officials presented the family with considerably more respect.

The family, like so many others in the unstable Muslim areas, was under tremendous strain. Ali's father, Shamil Yakubov, serves in the police at a time when police officers are assassinated daily in militant attacks. When he left for work, Ali's mother, Madina, remained at home with the baby and a young sister, left to ponder whether her husband might never return, local media have reported.

They reported on the boy because in Dagestan, state-supported media are actively promoting belief in folk Islamic traditions. The policy props up Sufi Islam, the traditional, mystical form of the religion in this region.

It is intended to counter the fundamentalist Islamic teachings that Russian officials believe inspire the underground movement.

Thus, local television stations and newspapers are awash in reports about Sufi mysticism, graves of saints in old cemeteries, miracle-working springs and the writing on little Ali.

According to the local reports, the Arabic script appears on Ali's skin as a rust-colored rash. He cries as the words emerge. They remain for about three days. The first message wove across his chin soon after birth, according to the grandmother. It said, "I am a slave of God."

Pilgrims soon came to this driveway, some bearing gifts. One of Russia's billionaires, a Muslim from the south, is building the family a new house, already going up next door. Government officials gave the family a new Lada car.

The messages on Ali's skin sometimes refer to the war, where his father is fighting on the government side. After insurgents assassinated an aide to a Sufi imam, or Islamic preacher, in neighboring Red Dawn village, the phrase "from grief comes deliverance" appeared, according to the imam of Red October Village.

Still, Akhmedpasha Amirilayev, a member of the district council, who first invited journalists to see the boy a year ago, touching off the excitement, said in an interview that the authorities and the family decided to limit access after Ms. Chapman's show was broadcast. In it, a professional illusionist in Moscow experiments with carrots, minced beats and spices to create a similar, sepia ink for writing on skin, ultimately settling on red wine and henna as the likely ingredients.

The show also discussed rare skin disorders. It cited an Arabist who noted that the messages on Ali's skin sometimes appear with spelling errors, something the grandmother took particular offense at.

It ended on a positive tone, however, suggesting that Ali's writing, whatever the origin, had brought hope to an area badly in need of it.

Still, local residents were unhappy. "That Chapman, she said, 'I will reveal the truth,' but what did she reveal? Nothing," the imam of Red October Village, Khizri Magomedov, said in an interview. "She didn't reveal anything."

Promoted
Listen to the latest songs, only on JioSaavn.com
Green Islamic flags still flap in the wind from the gate to the Yakubov front yard -- a sign to pilgrims, perhaps. At the moment of a recent visit by a reporter, Ms. Yakubova, the grandmother, said, the word "imam" was written on Ali's forehead. But he would not be shown.

After Ms. Chapman's report, she said, "we do not trust journalists."