The giant digital billboard is just three kilometers down the Strip from Trump's own hotel, where the president is staying while in Las Vegas. 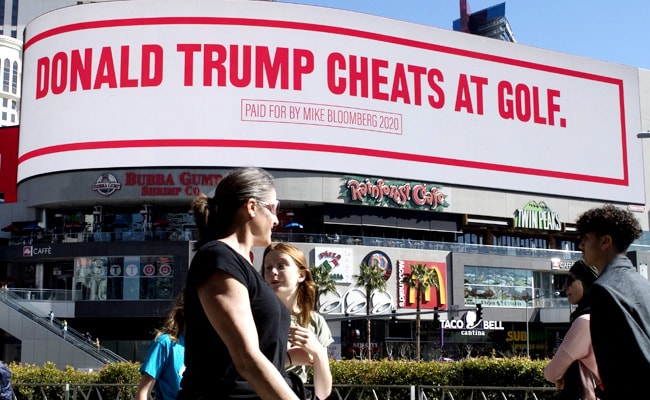 In a row between billionaires, golf was also a theme of the billboards

Democratic White House hopeful Michael Bloomberg mocked Donald Trump with a giant billboard on the Las Vegas Strip on Friday, fueling their feud as the US president visits the city for a rally.

"Donald Trump lost the popular vote," read one slogan on the world-famous street lined with casinos, while another read "Donald Trump's wall fell over."

The giant digital billboard is just two miles (three kilometers) down the Strip from Trump's own hotel, where the president is staying while in Las Vegas.

Bloomberg is vying for the Democratic nomination to take on Trump at November's election, and has focused his fire on the president rather than candidates from his own party.

When Bloomberg did face fellow Democrats at a Las Vegas debate on Wednesday, Trump was quick to crow: "Worst debate performance in history!"

Perhaps inevitably in a row between billionaires, golf was also a theme of the billboards -- "Donald Trump cheats at golf," read a third sign.

"A lot of people cheat at golf, it's probably true," said Gerry Frenze, a transport company owner from Delaware who was in town for a convention Friday.

"But I don't like the idea (Bloomberg) can buy his way into office."

His wife, Kim Corrigan, had little sympathy for Trump.

"Trump makes you want to attack him," she said. "I don't like (Bloomberg) doing that. But Trump started it. The way he operates cheapens everyone."

The attack comes on the eve of Nevada's key vote in the race for the Democratic nomination, with media from around the world in town.

Another passerby who did not wanted to be named simply shrugged: "He's got the money."

But Mya Sepeda, a tarot card reader working on a pedestrian bridge beneath the sign, took the matter more seriously.

"Maybe it's true but he is the president and he deserves a bit of respect," said Sepeda -- adding that he had foreseen Trump would win the last election.