Mexican Man, Once The World's Fattest, Dreams Of Walking Again

Now 33 years old, Juan Pedro Franco currently weighs in at 345 kilos. His bairatric surgeon expects him to lose about 100 kilos more in the next year and a half. 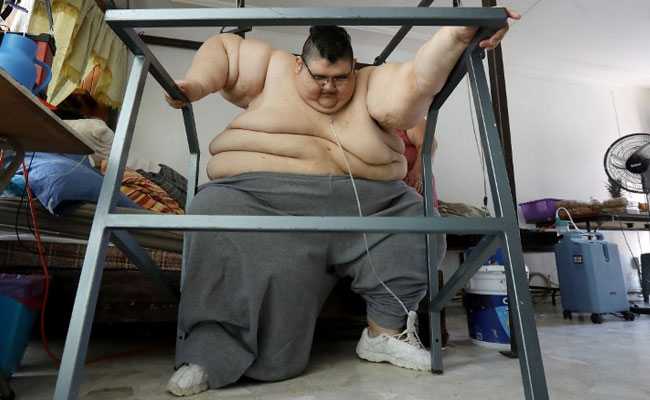 Guadalajara: The folds of flesh on Juan Pedro Franco's back sway heavily as he cranks the pedals of a modified bicycle with his arms, exercising to boost his already jaw-dropping weight-loss total of 250 kilos.

Franco, who comes from northern Mexico, used to be the world's fattest man.

Guinness World Records certified the title after he weighed in at 595 kilos in October 2016.

At the time, he was completely bed-ridden, suffered from diabetes and high blood pressure, and had a severely obstructed lung. Doctors warned his life was at risk if he didn't lose weight.

He and his mother moved from his home state, Aguascalientes, to Guadalajara in the west, the city where his bariatric surgeon, Jose Antonio Castaneda, has his clinic.

Castaneda put Franco, who suffers from hypothyroidism, on a "very severe" diet of Mediterranean cuisine for six months.

Then, in May 2017, came the first surgery: a gastric sleeve operation, which involves removing part of the stomach to reduce its volume by up to 80 percent. 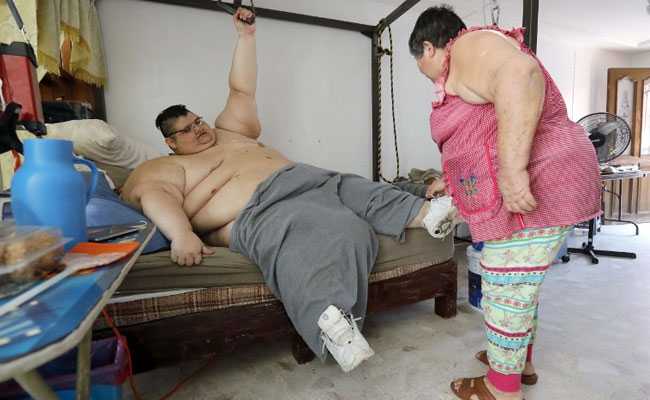 Six months later, he underwent a gastric bypass, in which Castaneda halved what remained of his stomach, and then connected one of the smaller pouches to the intestines.

The intestines themselves were also divided, to reduce his absorption of nutrients.

Since Franco could barely move at the time, burning off calories would never have been enough, doctors said. The only option was to radically reduce the size of his stomach.

Now 33 years old, Franco currently weighs in at 345 kilos. Castaneda expects him to lose about 100 kilos more in the next year and a half.

He is still connected to an oxygen tube 24 hours a day, but he spends less and less time lying in bed.

Using a walker, he has managed to take his first steps in years.

Franco's skin is pale white from lack of exposure to the sun.

He spends his days knitting scarves and making sweets for his family to sell -- his way of contributing to the household budget.

In his free time, he likes to sing and play guitar.

But a large part of his day is devoted to his exercises.

These include lifting weights, pulling resistance cords and pedaling his hand-cranked stationary bike. 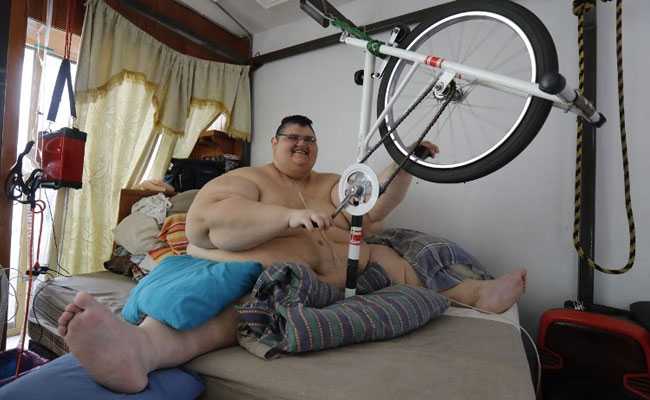 "I'm very happy because everything is going very well," he told AFP from his bed, which is outfitted with a custom-built metal structure that enables him to lift himself to his feet.

"He's doing more exercise each day," said Castaneda, at his side.

"He is making an effort to stand up by himself, to get his life on track. He has a very positive attitude."

According to the clinic, a lot now depends on how well he progresses and how he responds to treatment for the lymphedema in his legs -- accumulated fluid caused by the blockage of his lymphatic system.

"He remains a complex patient and will be at risk until he no longer suffers from extreme obesity," his medical team said in a statement.

"We are trying to save a life, and we will remain vigilant until he is out of danger."

According to the UN Food and Agriculture Organization and the World Health Organization, 58 percent of people in Latin America and the Caribbean are overweight.

Mexico is one of the countries worst affected by the problem, along with the Bahamas and Chile.

Franco is not the only Mexican to have been the world's fattest man.

His compatriot Manuel Uribe claimed the title in 2007 after weighing in at 597 kilos. He later went on a diet that brought him down to 394 kilos.

Promoted
Listen to the latest songs, only on JioSaavn.com
Uribe got married in 2008, after being lifted to the ceremony by a crane.