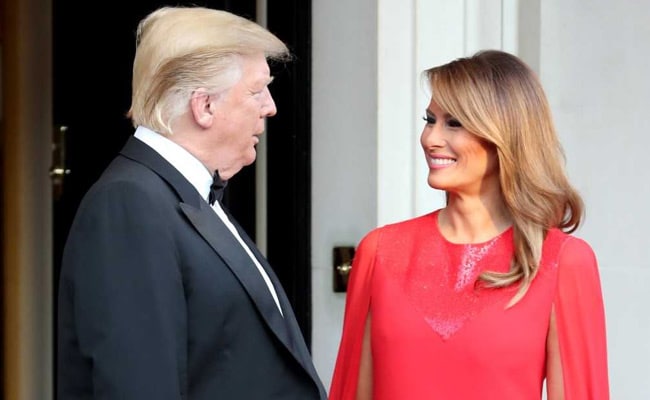 After enjoying a lavish dinner hosted by the British monarch on Tuesday, US President Donald Trump and First Lady Melania Trump hosted a special dinner at Winfield House for Prince Charles and his wife Camilla Parker Bowles, Duchess of Cornwall. Some royal family members and other prominent British public figures were also present during the dinner.

The gorgeous dress, made of wool crepe, has sequin-and-bead embroidered bodice panel and long cape sleeves that are slit open at the front.

Her red gown was completely different from the all-white Christian Dior ensemble she wore to the state dinner on Monday. Donald Trump kept things simple and wore a classic black and white tuxedo. 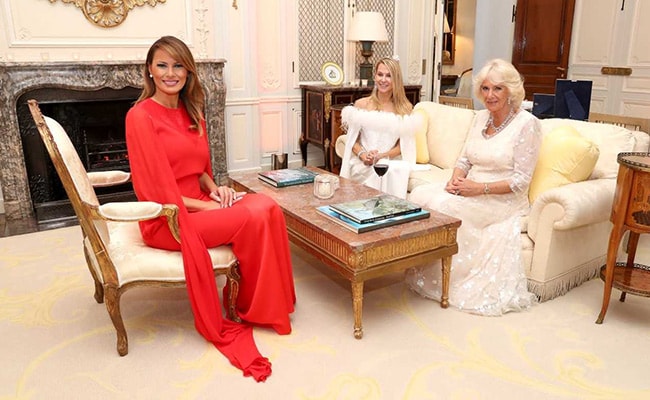 Melania Trump with the royals for special dinner. (AFP)

The red gown is the third time Melania has worn a cape-style outfit for a formal event since her husband took office. Last year, during a working visit to Britain and for a dinner at Blenheim Palace, she wore a sweeping Grecian-goddess pale chiffon gown by J Mendel with panels that fell from each shoulder in the style of a cape.

Camilla Parker Bowles looked elegant as ever in a white gown, featuring sheer sleeves and a floral embroidered overlay, by Fiona Clare.

Meghan Markle has not been seen lately following the birth of her and Prince Harry's son Archie. Prince Harry was, however, with the Trumps on Monday during a lunch hosted by Queen Elizabeth II and also visited an exhibit at Buckingham Palace after the president was welcomed in the palace garden. 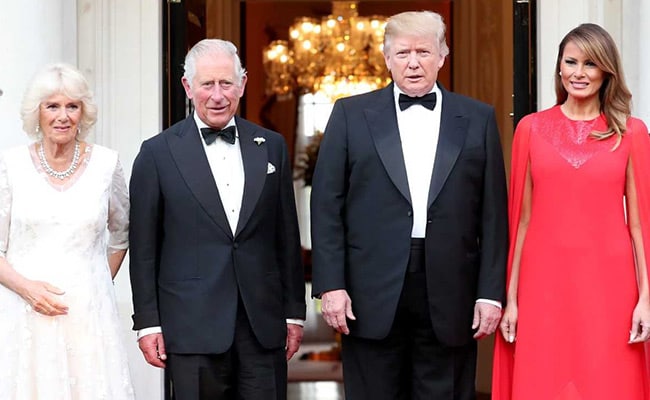 The Trumps were all smiles on Tuesday evening after Monday night's state dinner hosted by the queen at Buckingham Palace. The Trumps hosted the reciprocal dinner for the royals, with the Prince of Wales and his duchess representing his 93-year-old mother.

As per the tradition, the dinner was planned by the first lady. The guests relished one of the president's favourite meals: steak and potatoes, only fancier.

Donald and Melania Trump's children - Donald Trump Jr, Ivanka Trump and her husband Jared Kushner, Eric Trump and his wife, Lara and Tiffany Trump were present at the dinner.

The dinner was followed by a day of meetings to talk about business and politics. The Trumps also toured the Churchill War Rooms nearby.

It was the third time that the president mingled with the Prince of Wales during his visit. Besides dining at the state banquet, they also met for tea and a chat at Charles' London palace, Clarence House, on Monday afternoon.