'Mega-Drought' In Andes From Climate Change Leaves Some Peaks Snowless

Andes: Scant rain and snowfall are leaving many of the majestic mountains between Ecuador and Argentina with patchy snow cover or no snow at all as dry brown earth lies exposed. 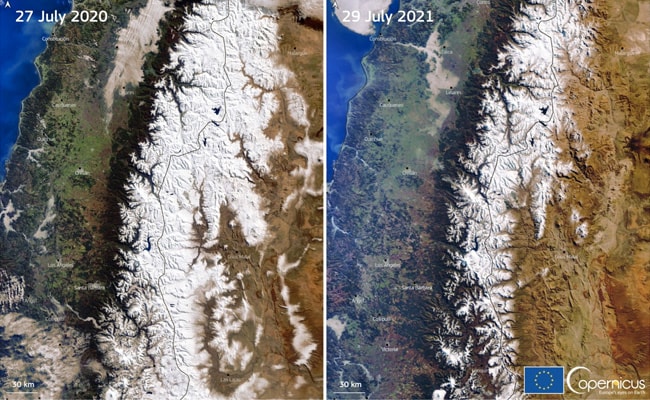 Andes: The Southern Hemisphere is experiencing winter, when snowfall should peak. (File)

The Andes Mountain range, which draws skiers to South America, is facing historically low snowfall this year during a decade-long drought that scientists link to global warming.

Scant rain and snowfall are leaving many of the majestic mountains between Ecuador and Argentina with patchy snow cover or no snow at all as dry brown earth lies exposed.

As precipitation declines and glaciers retreat across the region, communities that depend on the mountains for water supply are likely to suffer shortages, said Ricardo Villalba, principal investigator for the Argentine Institute of Snow, Glacier and Environment Science Studies (IANIGLA).

"Here we are seeing a process of long-term decrease in precipitation, a mega-drought," Villalba said.

"If you look at the precipitation levels right now for the entire Cordillera (Andes range), they ​​show that it has either not snowed at all or has snowed very little," he said.

The Southern Hemisphere is experiencing winter, when snowfall should peak.

Ski resorts have reopened after lengthy closures during the pandemic and are attracting jubilant skiers to the Argentina-Chile border. But scarce snowfall is forcing many resorts to move snow to cover popular runs or make artificial snow.

Satellite images from July 2020 and this year show a marked decrease in snow cover. That is mirrored in water level measurements for rivers.

The Andes' glaciers, which between 2000-2010 remained the same size or even grew, are now receding, Villalba said.

"The glaciers are in a very dramatic process of retreat that is much more accelerated than we have seen before," he said.

"This is unfortunately happening in all the glaciers of the Cordillera, and is strongly linked to the global warming process that is affecting the entire planet."