Initially, it was assumed that the man, who died in his 20s, had pale skin, but new analysis and facial reconstruction have revealed quite the opposite. It is now believed that Cheddar Man's ancestors arrived in Britain via the Middle East after leaving Africa. 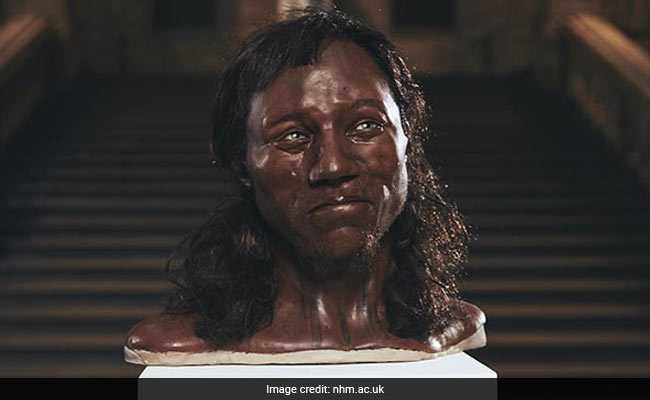 Model of Cheddar Man who had brown hair, blue eyes and "dark to black" skin

They call him Cheddar Man.

He lived more than 10,000 years ago, had brown hair, blue eyes and "dark to black" skin. To the surprise of many, he is believed to have been the first modern Briton.

A new project from London's Natural History Museum and University College London has revealed groundbreaking DNA results that give a much clearer image of early British inhabitants. Cheddar Man's skeleton was discovered in 1903 in Gough's Cave, located in Cheddar Gorge in Somerset, England. It is thought that the cool temperature in the cave helped to preserve the skeleton's valuable DNA.

"If the body was deposited in a good environment, where there was a cool and constant temperature, then the petrous bone is a good place to find useful ancient DNA," said the Natural History Museum's Selina Brace, who specializes in the study of ancient DNA. Scientists obtained DNA from Cheddar Man by drilling a 2-millimeter hole in his skull and extracting bone powder.

Initially, it was assumed that the man, who died in his 20s, had pale skin, but new analysis and facial reconstruction have revealed quite the opposite. It is now believed that Cheddar Man's ancestors arrived in Britain via the Middle East after leaving Africa.

"Cheddar Man is special because he represents the population occupying Europe at the time," said Tom Booth, a bio-archaeologist at the museum. "They had dark skin, and most of them had pigmented eyes, either blue or green." Data and software used in forensics gave Booth and the team a clearer understanding of Cheddar Man's skin pigmentation and how dark it was.

"Cheddar Man's skeleton revealed damage to the front of the skull, which led us to believe he had a violent death. But when we looked again, it appeared likely that the damage occurred since being dug up," Booth explained. "It's quite hard to figure out from the bones how he died, as most illnesses don't leave a trace on human remains." 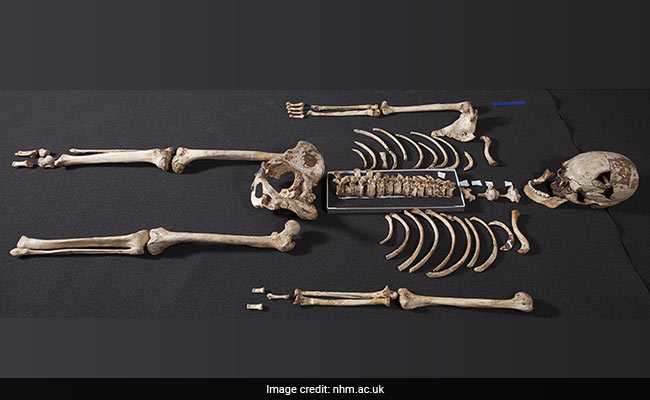 Using 3-D printing, Adrie and Alfons Kennis were able to bring Cheddar Man to life. The model took several months to build and is described as "truly unique." Booth described their work as "amazing" and said the two brothers are skilled "wizards" who were able to bring years of hard work and research to life.

Experts say the ancestor was a Mesolithic hunter-gatherer who would have spent his days carving tools, fishing and hunting animals. It is believed that Cheddar Man is related to 1 in 10 people living across the United Kingdom today. (Booth also said that, ironically, Cheddar Man was lactose intolerant.)

"Cheddar Man existed before farming had spread to Britain. By looking, we can tell he would have been unable to digest raw milk," Booth said.

Booth, who worked on the project for almost four years, said the Cheddar Man story is far from over. "The great thing is, because he's so well preserved, we'll be able to get more and more data from Cheddar Man all the time," he said.

In the future, Booth said, "we'll be seeking more information on Cheddar's diet, lifestyle and taking a look at common diseases from this time period."

"We don't have any other complete skeletons from this period," he said. "They're usually in bits and pieces. Therefore, we're determined to use Cheddar to find out as much as we can. He'll definitely leave a great legacy."

Promoted
Listen to the latest songs, only on JioSaavn.com
Cheddar Man's complete skeleton has been lent to the museum and is currently on display.