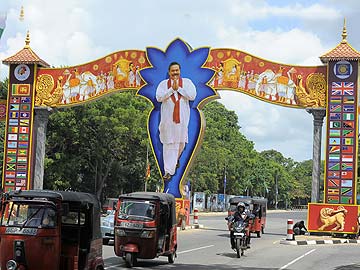 Port Louis, Mauritius: The prime minister of Mauritius announced on Tuesday he will stay away from this week's Commonwealth summit in Sri Lanka because of the host's poor human rights record.

Mauritius joins India and Canada in refusing to send a premier to Sri Lanka, which is accused of widespread human rights abuses against its Tamil minority and the killing of tens of thousands of civilians during its 2009 defeat of Tamil Tiger rebels.

"This is a decision taken by a sovereign Mauritius in the face of the absence of progress in Sri Lanka on the respect of human rights," Prime Minister Navin Chandra Ramgoolam told the Mauritian parliament.

He said Mauritius, which is to host the next Commonwealth Heads of Government Meeting in 2015, believed that "human rights are more important than everything else".

The prime minister also told AFP that the decision was taken because he had "closely followed the human rights situation" in Sri Lanka.

It will be the first time since the island's independence in 1968 that a Mauritian prime minister will be absent from a Commonwealth summit. The Indian Ocean island will instead be represented at the 53-member bloc's summit in Colombo by its foreign minister, Arvin Boolell.

India will also be represented by its foreign minister, while Commonwealth giant Canada is making the strongest boycott, sending only a lower level representative -- a parliamentary secretary dealing with human rights issues.

Ethnic Tamils make up an estimated 10 percent of Mauritius' population, and Menon Marday, a Tamil community representative in Mauritius, welcomed the government's decision.

"We congratulate the prime minister, who has acted out of respect for human rights and against the oppression of the Tamil community in Sri Lanka, where the genocide continues," he told AFP.

Promoted
Listen to the latest songs, only on JioSaavn.com
Sri Lanka's hawkish President Mahinda Rajapakse has said he was looking forward to highlighting his island nation's "tremendous transformation" after "suffering for decades from a brutal war against terrorism" that ended with the defeat of the Tigers in 2009.

The island has angrily dismissed widespread allegations that it committed war crimes during its final assault on the Tamil Tigers, but has resisted mounting calls for a full investigation.