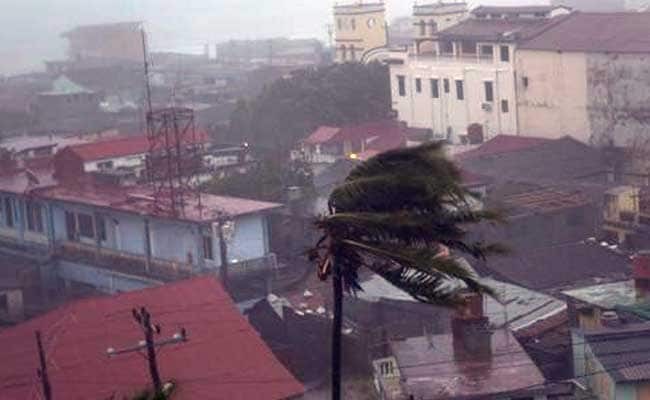 Hurricane Matthew is strongest Caribbean storm in a decade and most powerful to hit Haiti in 52 years.

Hurricane Matthew slammed into the southwestern coast of Haiti early Tuesday, unleashing 145 mph winds and torrential rains that threatened to wreak new devastation across a country still reeling from a ruinous earthquake six years ago.

The eye of the Category 4 storm made landfall around 7 a.m. Eastern time, near the coastal commune of Les Anglais, the U.S. National Hurricane Center reported. Matthew reached the eastern tip of Cuba - site of the U.S. Guantanamo Bay Naval Base and military prison - Tuesday evening en route to a projected collision with the U.S. East Coast by Thursday.

With the latest models showing the hurricane tracking westward toward Florida's Atlantic coast, Gov. Rick Scott (R) sternly warned residents in Matthew's path to be ready to evacuate. Scott has declared a state of emergency, activated 200 National Guardsmen and put 6,000 more on standby.

"Once this storm comes, we cannot put our first responders in harm's way," he said. "You must leave before it's too late. You can rebuild a home; you can rebuild a business; you cannot rebuild a life."

"We have to be prepared to be hit by a catastrophic hurricane," he said, adding that a direct hit could bring "massive destruction we haven't seen in years."

At Guantanamo, the Navy evacuated about 700 spouses and children of service members.

In South Carolina, Gov. Nikki Haley (R) announced that coastal communities would be evacuated at least 100 miles inland on Wednesday.

Because of lingering uncertainty about the track Matthew would ultimately take, forecasters warned that practically the entire east coast of Florida should brace for hurricane or tropical storm impacts Thursday and Friday, including heavy rain of four to seven inches - and up to 10 inches in spots - in the Upper Florida Keys northward to the east-central coast. The system then is expected to barrel up the East Coast toward the Mid-Atlantic into the weekend, The Washington Post's Capital Weather Gang reported.

The storm is the strongest Caribbean hurricane in nearly a decade and the most powerful to hit Haiti in 52 years, since Hurricane Cleo struck in the same location. Matthew also triggered warnings and watches for parts of the Bahamas, the Dominican Republic, Jamaica and the Turks and Caicos Islands as it followed a path marked by multiple landfalls.

In Haiti - where tens of thousands of people still live in tents after losing their homes in the 2010 earthquake that killed more than 200,000, and where thousands more died in a subsequent cholera epidemic blamed on U.N. peacekeepers - Hurricane Matthew battered coastal shantytowns as it came ashore.

In one dramatic video, a man shouted in English, "Pray for us," as Matthew lashed the small port of Les Cayes on Haiti's southwestern coast. A major concern in such low-lying areas is the persistent danger from flooding and mudslides, relief officials said.

At least 11 deaths were attributed to the storm as of early afternoon Tuesday. However, the full extent of the damage and casualties won't be known until the storm passes and relief services arrive.

Among the reported dead were five in Haiti and four people in the neighboring Dominican Republic, including three children who were killed when the walls of their home collapsed, news agencies reported. Last week, two people died in the storm - in Colombia and on the Caribbean island of St. Vincent.

"It's much too early to know how bad things are, but we do know there are a lot of houses that have been destroyed or damaged in the south," Marie Alta Jean-Baptiste, director of Haiti's Civil Protection Agency, told the Associated Press.

Catholic Relief Services, a charity active in Haiti, reported flooding and toppled trees in Les Cayes, where it has an office.

Chris Bessey, the CRS country representative based in the capital, Port-au-Prince, said the storm blew part of the roof off the charity's two-story building in Les Cayes and knocked out its generator. The river there has crested, the streets are flooded, and the main road to southern Haiti has been cut because a bridge was washed out at Petit-Goave, he said by telephone from Port-au-Prince.

UNICEF warned that more than 4 million children were at risk in Haiti.

"This is the worst storm Haiti has seen in decades, and the damage will no doubt be significant," Marc Vincent, UNICEF's representative in Haiti, said in a statement. "Waterborne diseases are the first threat to children in similar situations - our first priority is to make sure children have enough safe water."

Haitian authorities called on the peacekeepers of the U.N. Stabilization Mission in Haiti to assist in the response to the hurricane, said Ariane Quentier, a spokeswoman for the mission. But with the storm still raging, there was little they could do.

"We're also waiting for the rain and the wind to stop," Quentier said by phone from Port-au-Prince. "Right now it's impossible to get a helicopter up."

Quentier said that 80 percent of the schools in the hardest-hit areas have been turned into shelters and that authorities have been trying to get people to evacuate their homes and head to those sites.

"We're seeing enormous amounts of flooding, enormous amounts of wind damage," said John Hasse, national director for the aid organization World Vision in Haiti. Before Matthew made landfall, staffers had been trying to persuade people to get to safe structures, he said.

"Yet right up until the storm hit, we still heard many people saying, 'We're waiting on God' and not making preparations," Hasse said. He said the charity has warehouses stocked with blankets, tarps, water cans and hygiene kits to assist nearly 100,000 people, but "we expect it to go well over a million to even millions of people affected by this."

Relief officials said many people rejected pleas to evacuate, fearing that they would lose their meager belongings to looters. For some, who changed their minds as the powerful storm unleashed its fury, it was now too late to help them, the officials said.

With the storm expected to linger over land masses, the National Hurricane Center forecast 15 to 25 inches of rainfall on southern Haiti and the southwestern Dominican Republic, with as much as 40 inches falling in some places. Eastern Cuba and northwestern Haiti were projected to get eight to 12 inches, and up to 20 inches in isolated spots.

As a result, the center said, "life-threatening flash floods and mudslides are likely from this rainfall in southern and northwestern Haiti, the southwestern Dominican Republic and eastern Cuba." In addition, it said, storm surges of up to 10 feet could hit the southern coasts of Haiti and Cuba.

In the vast Cite Soleil slum in Port-au-Prince, 130 children were evacuated from an orphanage ahead of winds and rain that authorities feared could ravage the densely populated area of tin shanties, open sewers and canals.

As if the country did not have enough to worry about, a long-delayed presidential election is scheduled for Sunday, and the government had no immediate plans to postpone it.