Tension was high in the capital after security forces stormed the headquarters of the opposition Bangladesh Nationalist Party (BNP) on Tuesday. 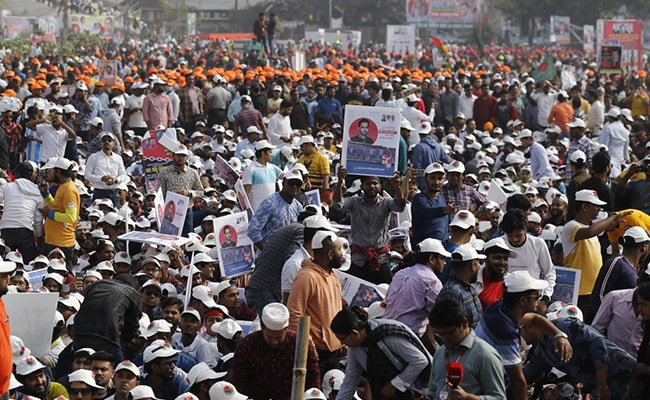 A BNP official claimed that some 200,000 people had joined Saturday's rally by mid-morning.

"Sheikh Hasina is a vote thief," they chanted at the Golapbagh sports ground where the rally was held as the crowd spilled into surrounding streets.

All seven opposition Bangladesh Nationalist Party (BNP) MPs announced their resignations from parliament at the event, which will leave the legislature largely a rubber stamp -- Hasina's party already had more than a two-thirds majority.

Western governments and the United Nations have expressed concerns over the political climate in Bangladesh.

It is one of the fastest-growing economies in Asia but the Ukraine war has forced the government to suspend gas and diesel imports, while power cuts and fuel price hikes have triggered demonstrations in recent months.

The Bangladeshi taka has depreciated by up to 25 percent, driving up the cost of food imports and hitting poor and lower middle class people.

Autorickshaw driver Russel Miah joined the rally to express anger at rising prices of food and other commodities, which he said had left him struggling to provide his family with three meals a day.

"I am a victim of oppression," he said. "I came here today to protest against the people who are responsible for my current situation."

None of Bangladesh's half-dozen television news stations carried live coverage of the event, raising suspicions authorities had pressured them not to.

A BNP official claimed that hundreds of thousands of people had joined the rally by mid-morning.

"Our main demand is Sheikh Hasina resign and parliament is dissolved and let a neutral caretaker government step in to hold a free and fair election," spokesman Zahiruddin Swapan told AFP.

A senior security officer speaking on condition of anonymity estimated the crowd at up to 80,000 people.

There had been no violence so far but SWAT teams, counter-terrorism units and canine squads were on standby, said Dhaka Metropolitan Police spokesman Faruq Ahmed.

Tension was high in the capital after security forces stormed the BNP headquarters on Tuesday, leaving at least one person dead and scores injured.

Two of the party's top leaders were arrested on Friday on charges of inciting the violence, adding to the roughly 2,000 activists and supporters the party said had been detained since November 30 to try to prevent the rally from going ahead.

The opposition has been holding protests around the country and Hasina has rejected outright their demands for her resignation and an election under a caretaker government.

Police set up checkpoints on routes into Dhaka and security was tight across the sprawling metropolis of 20 million people on Saturday. Another police officer said up to 3,000 policemen were deployed outside the rally ground to ensure security.

Only a handful of cycle rickshaws and cars plied Dhaka's normally congested roads, with BNP officials accusing the government of triggering an unofficial transport strike to try to prevent people from joining the rally.

Mohammad Alamgir, a businessman who travelled from the southern island of Bhola to attend the protest, said: "I don't support any political party. We want freedom from the current situation."