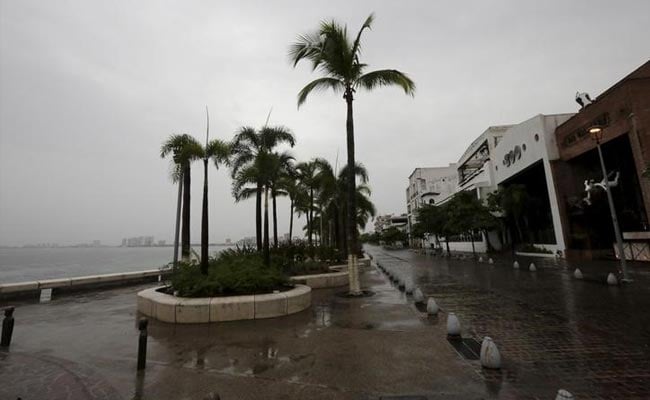 Mexican officials said that Hurricane Patricia did not inflict major damage as it did not hit large population centers. (Reuters photo)

PUERTO VALLARTA, Mexico: Patricia, one of the strongest ever hurricanes, crashed into western Mexico with rain and winds of up to 165 mph (266 kph), hammering coastal areas but skirting major cities and causing less damage than feared.

Mowing down trees, flooding streets and battering buildings, Hurricane Patricia plowed into Mexico as a Category 5 storm on Friday evening before grinding inland. It rapidly lost power in the mountains that rise up along the Pacific coast and was downgraded to a tropical storm by Saturday morning.

So far, it appeared that major damage had been averted because the powerful storm did not hit large population centers.

Around 15,000 tourists had been hurriedly evacuated from the beach resort of Puerto Vallarta as people scrambled to get away from the advancing hurricane, whose massive swirl over Mexico could be seen clearly from space.

"It sparked chaos here, it ruined a lot of things, took down the roof, lots of trees. Things are in a bad state where we work," said Domingo Hernandez, a hotel worker in the resort of Barra de Navidad near to the major port of Manzanillo.

Thousands of residents and tourists ended up in improvised shelters, but there were no early reports of fatalities and many felt they had escaped lightly.

The storm hit land near the area of Cuixmala, home to one of Mexico's most exclusive getaways, at 6:15 p.m. (2315 GMT) on Friday, the U.S National Hurricane Center said.

Cuixmala, located between the major port of Manzanillo and Puerto Vallarta, has over the years played host to a colorful assortment of world leaders and eccentric billionaires.

The area is sparsely populated but there are small towns, and it was not clear yet how much damage they had suffered.

At one point generating sustained winds of 200 mph (322 kph), Patricia was the strongest hurricane ever recorded in the Western Hemisphere.

Even though it lost some power before coming ashore, it was still a Category 5 storm, the strongest on the five-step Saffir-Simpson scale. Such storms are relatively rare and are capable of causing devastating destruction.

Patricia's edges caused flooding in parts of Puerto Vallarta, but the resort escaped the worst of the storm and dozens of tourists were able to leave shelters and return to their hotels on Friday night.

"I don't think there's going to be a big problem with the water," said Dario Pomina, 43, manager of the Posadas de Roger hotel in the city center. "Things are more or less okay."

Brian Shelley, a tourist from Chicago, rode out the storm eating burgers with other guests at a boutique hotel on a hill in Puerto Vallarta.

After talking one of his panicked traveling companions into staying, he was glad the storm turned out to be less punishing than was feared. "I've seen bigger waves on normal days," he joked.

Patricia rapidly lost power once it traveled inland. By Saturday morning it had been downgraded to a tropical storm with its maximum winds down to about 50 mph (80 kph), the Miami-based Hurricane Center said.

The storm was located about 35 miles (55 km) northeast of the central city of Zacatecas, moving north-northeast at 21 mph (34 kph), the center said. It could dissipate by Saturday night.

Even though it was weakening, Patricia was expected to produce total rainfall accumulations of 8 to 12 inches (20 to 30 cm), with isolated maximum amounts of 20 inches (50 cm), over the Mexican states of Nayarit, Jalisco, Colima, Michoacan, and Guerrero through Saturday, the Hurrricane Center said.

In a brief televised address on Friday, President Enrique Pena Nieto urged Mexicans to take precautions, warning that the storm which weather forecasters had said could cause catastrophic damage still posed a serious risk.

"The initial reports confirm that damage has been less than would be expected of a hurricane of this magnitude," Pena Nieto said. "But we cannot lower our guard yet."

The government cautioned that ash and other material from the volcano of Colima, some 130 miles (210 km) from Puerto Vallarta, could combine with heavy rainfall to trigger liquid cement-style mudflows that could smother villages.

The Mexican Red Cross said it had dispatched relief teams and trucks packed with humanitarian supplies ahead of the hurricane's landfall.

Patricia became a tropical storm in the Pacific on Thursday, and strengthened with stunning speed as it closed in on the Mexican coast. Meteorological authorities compared it to Typhoon Haiyan, which killed over 6,300 people in the Philippines in 2013.

Destructive weather fronts have hit both the Pacific and Gulf coasts of Mexico over the years.

Thousands of tourists in the resorts of the Baja California Peninsula were stranded by tropical storm Odile in September 2014, while the convergence of two storms a year earlier triggered flash floods that killed dozens of people.