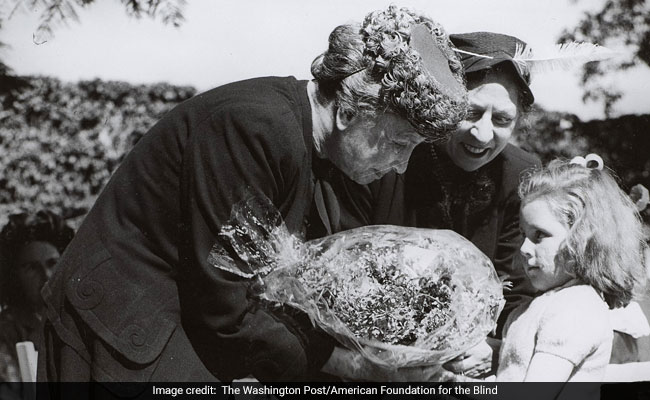 Helen Keller published her autobiography "The Story of My Life," before graduating from Radcliffe College

"Is it not a disgrace to this great, prosperous, resourceful country that there should be thousands of children growing up under conditions which hinder their normal development, dampen the ardor of youth and quench the fire of aspiration in their young hearts?

Thousands of boys and girls - the most precious treasure of the nation - live in crowded tenements where the walls are bare, the furniture cheap and ugly, and food coarse and served in a slovenly manner, wear shabby clothes, play in alleys and gutters, exposed always to soul-destroying influences." - Helen Keller, writing in a 1923 fundraising letter on behalf of the National Playground and Recreation Association of America.

This letter, which Keller wrote on a Braille typewriter, is part of the Helen Keller Archive that launched last month by the American Foundation for the Blind, a collection that includes more than 160,000 artifacts about Keller and her extraordinary life. The archive "is the first of its kind to be fully accessible to blind, deaf, hard-of-hearing, low vision and deaf-blind audiences," the foundation said in a statement.

The New York City archive is one of the largest collections of content about the life and work of Keller, who became one of the most famous advocates for children and people with disabilities. Keller, who was "a feminist, a suffragist, a social activist and a pacifist, as well as a prolific writer and published author," worked for the American Foundation for the Blind for 44 years.

As Helen grew, "she became wild and unruly," the foundation said. But on March 3, 1887, she met Anne Mansfield Sullivan, a teacher who would change her life when she taught her how to read and write.

"As the cool water gushed over one hand, she spelled into the other hand the word 'w-a-t-e-r' first slowly, then rapidly. Suddenly, the signals had meaning in Helen's mind. She knew that 'water' meant the wonderful cool substance flowing over her hand. Quickly, she stopped and touched the earth and demanded its letter name and by nightfall she had learned 30 words."

The foundation notes Keller quickly learned the entire alphabet, "both manual and in raised print for blind readers, and gained facility in reading and writing."

A year before she graduated from Radcliffe College in 1904, Keller published her autobiography, "The Story of My Life," which had been published as a series in Ladies' Home Journal magazine.
Mark Twain once said: "The two most interesting characters of the 19th century are Napoleon and Helen Keller."

When she died on June 1, 1968, at the age of 87, she bequeathed all of her belongings to the American Foundation for the Blind. "Due to their fragility, many of these items were unavailable to the public until now," the foundation said in a statement.

The archive includes copies of more than 475 speeches and essays that Keller wrote. "Despite her fame, relatively few people know that Helen Keller wrote 14 books as well as hundreds of essays and articles on a broad array of subjects ranging from animals and atomic energy to Mahatma Gandhi," the foundation said.

"Helen Keller was always a vocal supporter for the rights of children," said Helen Selsdon, the American Foundation for the Blind archivist.
In her lifetime, Keller visited more than 39 countries, where she often did advocacy work. "The archive includes images of her meeting with children from orphanages, her speaking engagements at schools for students with disabilities, and her outreach to agencies that helped impoverished children. The needs of children were always primary in her mind when she conducted diplomatic visits."

In a May 28, 1918 letter, requesting help for children in orphanages in France, Keller wrote:"I beseech you, open your ears to the cry of the fatherless little ones of France and give all you possibly can to help them ..."Remember you were children once, happy in the midst of peace and love. Think of the children who smile up trustfully into your faces and give freely to the unfortunate children over there. Think how small they are to have the hand of sorrow laid so heavily upon them!
"What a short time they will be children, and how little joy there will be in their childhood without your help!"
"It's an amalgam of her own materials," Selsdon said of the archive in an interview.

Selsdon explained that for visually impaired visitors to the site, a computer can read documents. "It creates an initial transcript of thousands of Helen Keller's papers, receipts, letters," she said.
"If you are blind, visually impaired, hard of hearing and deaf/blind, it is sensational. The content is accessible. The interface is accessible. We have extensively tested the site to make it user-friendly," Selsdon said.

There is also a massive volunteer effort to correct any errors generated by the computer and to transcribe handwritten materials.
For those who are blind and deaf and want to access film footage, the archives contains video descriptions and captioning.

"People are stunned at the breadth of her life," Selsdon said. Keller appeared in front of state legislators and on Capitol Hill and demanded rehabilitation services and schools for blind kids, she said.
"I have correspondence from senators saying as a direct result of your appearance, the laws were changed and the world of those with vision loss was improved. She did the same thing globally," Selsdon said.

Keller received a Presidential Medal of Freedom from President Lyndon Johnson. "She has correspondence from nine U.S. presidents, Alexander Bell; Mark Twain; Andrew Carnegie."
The collection aims to answer as many questions as possible about Keller and her life. "People ask me what food did she like," Selsdon said. "She liked hot dogs. And she writes a lot about martinis. She was a great drinker. She was full of life. She wasn't some staid lady. She was neither a child of the water nor a saintly old woman."

Keller received a Presidential Medal of Freedom from President Lyndon Johnson. "She has correspondence from nine U.S. presidents, Alexander Bell; Mark Twain; Andrew Carnegie."
The collection aims to answer as many questions as possible about Keller and her life. "People ask me what food did she like," Selsdon said. "She liked hot dogs. And she writes a lot about martinis. She was a great drinker. She was full of life. She wasn't some staid lady. She was neither a child of the water nor a saintly old woman."

Helen KellerAmerican Foundation for the Blind