The environment ministry said it believes illegal grass burning was to blame for the fire, with the situation aggravated by strong wind and drought. 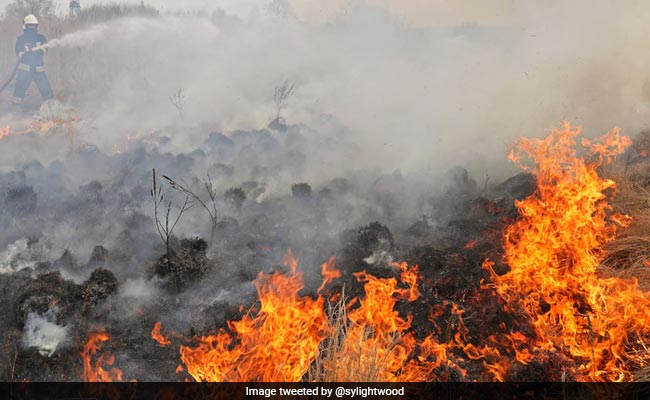 After the first flames struck Sunday, the blaze spread across 6,000 hectares or 10 percent of the park, which features some of Europe's best preserved wetlands and is home to moose, beavers, wolves and unique birds.

"It's a great tragedy... Usually at this time of year, everything here is under water. I spoke to a firefighter who said they've never dealt with anything like this before," local resident Joanna Skrzypkowska told AFP.

"They're fighting really hard... they didn't sleep for three nights, just battled the fires, before help arrived," said the 56-year-old teacher, ecologist and farmer from the village of Wolka Piaseczna.

Park director Andrzej Grygoruk told the website Noizz that the last time Biebrza saw a major fire was in 2003.

- 'Without rain we could be in danger' -

The environment ministry said it believes illegal grass burning was to blame for the fire, with the situation aggravated by strong wind and drought.

Skrzypkowska said climate change, a snowless winter and local water management also played a role in the fire, which she says has fortunately not spread to the forests and has abated somewhat.

She added that since Wednesday the volunteer firefighters -- who ran to the blaze on foot with shovels -- have been bolstered by colleagues from nearby cities as well as planes and helicopters.

But firefighters say it is unclear when they will be able to put out the fire completely.

"I'm afraid it won't happen until we get some real, proper rain," said Skrzypkowska, adding that it has now been a month or two without precipitation.

President Andrzej Duda spoke of the nationwide drought on Wednesday, calling on citizens to be reasonable about their water use and telling reporters: "Without rain, we could be in danger."

In Warsaw, the water level of the Vistula river has sunk to 60 centimetres (24 inches), uncovering many sandbanks.

Biebrza National Park is known as a bird watcher's paradise: some 270 species have been observed there, according to its website.

"For some waterfowl species, Biebrza marshes are among the last refuges for the survival of their population in Central Europe," according to the site.

Park management said Thursday that it has received nearly 1.2 million zloty (260,000 euros, $290,000) in donations to help firefighters after setting up a special bank account for the cause.