In the new study, Jennifer Wadsworth and Charles Cockell showed the compound can also be activated by UV light, without heat, in conditions mimicking those on the martian surface. 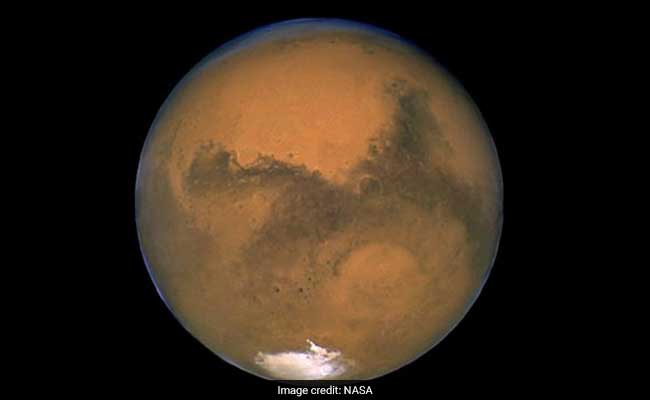 Hopes of finding life on Mars, at least on the surface, were dealt a blow Thursday by a study

Paris, France: Hopes of finding life on Mars, at least on the surface, were dealt a blow Thursday by a study revealing that salt minerals present on the Red Planet kill bacteria.

In lab tests on Earth, the compounds known as perchlorates killed cultures of the bacteria Bacillus subtilis, a basic life form, a research duo from the University of Edinburgh's School of Physics and Astronomy reported.

In the new study, Jennifer Wadsworth and Charles Cockell showed the compound can also be activated by UV light, without heat, in conditions mimicking those on the martian surface.

It killed bacteria within minutes, said the team, implying the planet was "more uninhabitable than previously thought."

"If we want to find life on Mars, we have to take this into consideration and look at trying to find sub-surface life that wouldn't be exposed to these conditions," Wadsworth told AFP.

Perchlorates are natural and man-made on Earth, but are more abundant on Mars where they were first recorded by NASA's Phoenix Lander in 2008.

The fact that perchlorates killed B. subtilis in the presence of UV radiation did not necessarily mean that all other life forms would similarly die, said Wadsworth. Further tests would have to be done to confirm this.

Perchlorates have previously been spotted in lines, thought to be brine streaks, on the surface of Mars.

Their presence was presented as evidence by scientists in 2015 of liquid water on the Red Planet.

But the new study said brine seeps, "although they represent local regions of water availability, could be deleterious to cells" if they contain perchlorates.

The findings do contain some good news.

They mean that organic contaminants left on Mars by robotic exploration, of which B. subtilis is a common one, are unlikely to survive long.

It is widely accepted that the Red Planet once hosted plentiful water in liquid form, and still has water today, albeit frozen in ice underground.

Promoted
Listen to the latest songs, only on JioSaavn.com
Liquid water is a prerequisite for life as we know it.