The flight, piloted by Virgin Galactic pilots Mark "Forger" Stucky and CJ Sturckow, heralded a new era in human spaceflight and was a coup for the company founded by Richard Branson more than 14 years ago. 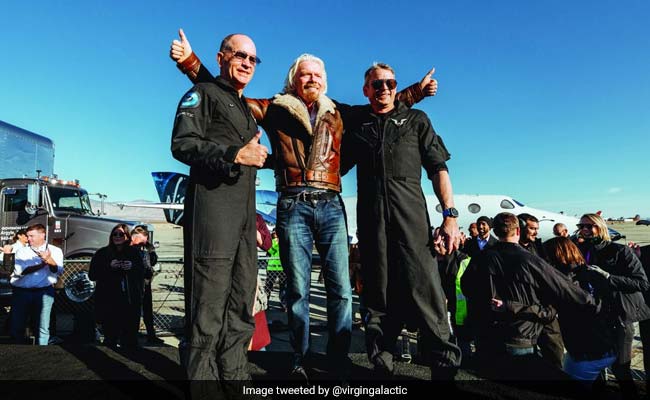 The Federal Aviation Administration awarded two Virgin Galactic pilots commercial astronaut wings Thursday, after a spacecraft piloted by Mark "Forger" Stucky and C.J. Sturckow hit an altitude of 51.4 miles in a daring test flight over the Mojave Desert in December.

The flight heralded a new era in human spaceflight and was a coup for the company founded by Richard Branson more than 14 years ago. Branson has said his goal at the time - one day flying tourists to the edge of space and back - could be realized this year.

Speaking Thursday at the U.S. Department of Transportation, Branson called the flight "a moment of historical significance, a moment of inspiration and of optimism for the future." He added that after years of trying, "we are finally at the dawn of a new age of space exploration."

In presenting the decoration, Transportation Secretary Elaine Chao said the achievement encapsulates "an era of innovation that historians may one day call the rocket renaissance."

The ceremony came as a number of companies are working to fly humans to space this year. Blue Origin, the space company founded by Amazon founder Jeff Bezos, also plans to fly paying customers on suborbital jaunts through the atmosphere. (Bezos owns The Washington Post.)

Our two @VirginGalactic pilots who flew SpaceShipTwo to space, have been awarded Commercial Astronaut Wings by the @USDOT. Congratulations Mark 'Forger' Stucky and CJ Sturckow. pic.twitter.com/HMUzfCBf7B

Boeing and Elon Musk's SpaceX are also preparing to fly NASA's astronauts to the International Space Station as early as this year.

Unlike those companies, which launch rockets that take off vertically, Virgin Galactic flies a winged vehicle with a powerful rocket motor called SpaceShipTwo. It is hoisted aloft while tethered to the belly of a mother ship. Then, at about 40,000 feet, it is released. The pilot fires the motor and steers the spacecraft near-vertical as it barrels through the atmosphere.

"It's almost instantaneous," Stucky said in an interview before the ceremony. "But it's very smooth . . . a very sharp, quick acceleration. It's like a catapult launch. You're immediately accelerating. You're pinned back in the seat."

On Dec. 13, Stucky fired the motor, and soon the spacecraft was traveling at a top speed of Mach 2.9, or nearly three times the speed of sound. On the ground, a few hundred people watched anxiously, their necks craned to the sky.

This is @VirginGalactic pilot, CJ Sturckow. He is the first person in history to receive both Naval Aviator Astronaut Wings and Commercial Astronaut Wings. Watch @USDOT present him with this honor, today at 2:30pm ET. https://t.co/CRYV5LsS5rpic.twitter.com/p9iLLCKyem

Many had been standing in the same spot during a similar test flight in 2014, when the spacecraft came apart midflight, killing pilot Michael Alsbury in an accident that led to a federal investigation and set the program back years.

This time, though, the flight was a success. The crowd on the ground cheered as the announcer called out the altitude. Branson and his son embraced. And on the descent, Stucky pulled a triumphant barrel roll that was part of the flight profile, designed to test the spacecraft.

"A flight is not a flight unless you fly upside down," Stucky said in the interview.

Branson has said that after the flight he shed tears of joy and relief that his pilots landed safely.

"Test flights have always got a risk element. It's the most difficult time for a space line," Branson said an interview. As for Stucky and Sturckow, he said: "They were incredibly brave."

Meet Mark 'Forger' Stucky, one of our @VirginGalactic pilots and the 568th human in space. At 2:30pm ET tomorrow, he'll be awarded Commercial Astronaut Wings by the @USDOT. You can watch the historic ceremony live here - https://t.co/5AchIDZjvnpic.twitter.com/ukALLFhDoJ

For Stucky, the space flight was a climax of a long career. As a military test pilot, he flew the SR-71 Blackbird, a supersonic jet used by the military to fly high and fast over enemy territory. For Sturckow, a former Marine Corps test pilot who flew combat missions during the 1991 Gulf War, it was his fifth trip to space. As a NASA astronaut, he flew four shuttle missions.

The last time the FAA issued astronaut wings was in 2004, to Mike Melvill and Brian Binnie, who flew SpaceShipOne, the predecessor to Virgin Galactic's spaceplane. The first privately backed vehicle to make it past the edge of space, it now hangs in the National Air and Space Museum next to the Spirit of St. Louis.

Later Thursday, at a ceremony at the National Air and Space Museum, Virgin Galactic donated the rocket motor used in the December flight. It will join SpaceShipOne in the museum's collection and "help us tell the story of this moment of aerospace history," said Ellen Stofan, the museum's director.

We are excited to accept into our collection RocketMotorTwo, the hybrid engine that powered @virgingalactic's SpaceShipTwo on its December 13 flight. Thanks @RichardBranson for helping us unveil our new artifact! #IdeasThatDefypic.twitter.com/Nxrh9dvzgs

It will ultimately become part of an exhibit called the "Future of Spaceflight," to open in 2024 that Stofan said will chronicle "a new generation of explorers and innovators."

Virgin's flight was the first time humans had reached the edge of space since the space shuttle was retired in 2011. And it was the first commercial vehicle - that is, built without government money - designed to reach space with passengers.

The company has said it has about 700 people signed up for suborbital space trips, which today cost $250,000 per ticket. Branson has said he hopes to start flying passengers by this year from Spaceport America in New Mexico.

While the vehicle did not make it to 62 miles, or 100 kilometers, which many consider the altitude where space begins, it did cross the 50-mile threshold, which is recognized by the U.S. government. In the 1960s, the Air Force awarded astronaut wings to the pilots in the X-15 program who flew the aircraft 50 miles or higher.

(Except for the headline, this story has not been edited by NDTV staff and is published from a syndicated feed.)
Comments
Mark "Forger" StuckyCJ SturckowVirgin Galactic